Bus lanes were in the news this past week with the MD of Addison Lee openly encouraging his drivers to break the law in London and use bus lanes. Addison Lee is also a motorbike courier firm and they donate large amounts of money to the Conservative Party who don't like bus lanes. The M4 bus lane was scrapped, thus creating a lovely new traffic jam into our capital, just in time for the Olympics.

More recently, Mayor Boris opened up the bus lanes in London for motorbikes to use bus lanes and Transport for London has issued powered two wheel users with lots of lovely 'guidelines' and 'rules' for them to follow. Funny how Boris Johnson had his 2008 election campaign partly financed by...guess who?. It looks like his 2012 campaign is being propped up by AL too, and red Ken has taken a pot shot at him.

So why is this relevant to Bristol?. Well, motorbikes have been allowed to use bus lanes here since the mid 90's, often cited by Boris as a shining example of how it can work. In fact, here's a little video of how it does work. And here's how to use the Bristol bus lanes (that is, the ones for very, very thin buses): 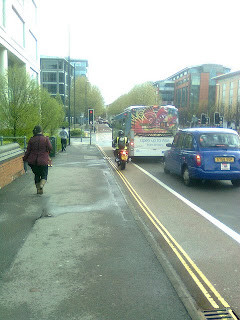 Riding motorbikes starts at an early age and it's vital to get some training in before hitting the Bristol streets. Where better to start than an old railway line?. You can get some speed up and improve your skills by weaving in and out of tax dodging cyclists and pedestrians.