There's a web site, Tufton or Death, where campaigners are trying to save the lives of people that use a turn-off on the A34 "Chievley Services" Road.

This is relevant, as some Cliftonians are now campaigning about their RPZ plans, with signs round the area placed perfectly at eye-level for anyone driving a little urban 4x4 -meaning exactly the kind of people that Clifton depends on. 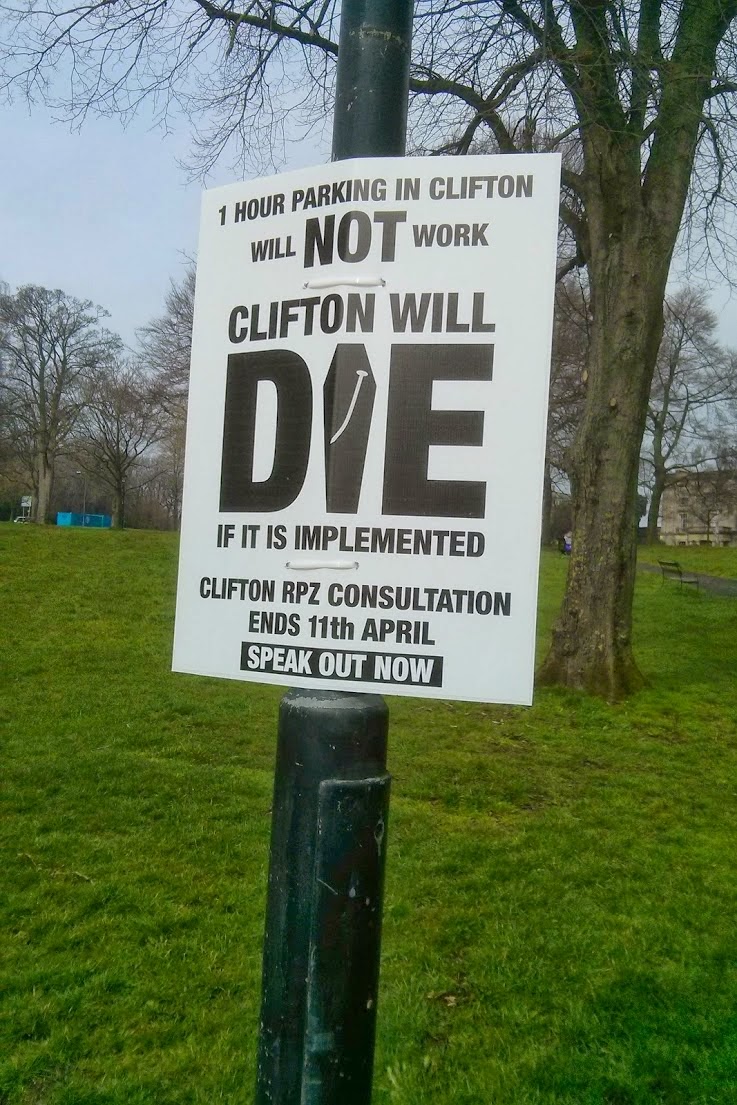 One thing to call out here, if you step back a bit, what it looks like


Not
Clifton Will
DIE

Which can then be parsed as "Clifton Will Not Die"...

Anyway, interesting to see the signs. In today's BBC Radio 4 Costing the Earth program we got to hear a someone describe the residents of Clifton as "In the driving seat". That was not a metaphor: it is a statement of fact.

Imposing time limits on parking in Clifton is either going to force residents to walk a bit, or destroy the village the way it did to Southville. We shall have to see what the outcome is. Of course, Southville tried to address the problem by adding bike parking -something Clifton has strongly resist on the basis that it is out of keeping with the area. Is the RPZ plan a first step to forcing Clifton Village to actually have bike parking?

Meanwhile, keep an eye on what happens here. What's impressive is that someone had the money to print some nice posters. Elsewhere in the city the protests were limited to bits of paper run off home printers. This though -professional.
Posted by Bristol Traffic at 18:43

With business acumen and entrepreneurial drive I would have expected the people running this curious campaign to have been engaged at a much earlier stage in the planning process with a coherent case for an alternative set of solutions to the very obvious problems that beset Clifton Village.

I moved here three years ago because Clifton is an urban area close to lots of good things and a place where you are better off without a car. The roads are chaotic and unfit for purpose, but walking cycling and a good regular bus provide all I need.