A&S Police: this is not a crime. Move along now

Some people ask if a 20 mph speed limit is bringing the city to its knees. The answer is no: all you have to do is overtake any car driving too slow for you

The driver of L861CDW demonstrates the correct way to do this, overtaking the Fiat 500 which had slowed down to let a school-running family, a family signalling to turn right. 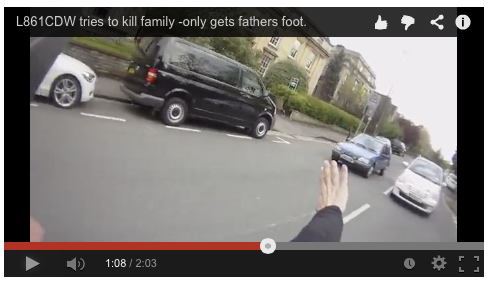 We aren't going embed it as there is a lot of swearing at the point when the cyclist thinks they are about to get hit by the car.

If you see the discussion afterwards, the driver runs over the cyclists foot (so they assert), and state this to the driver, who looks back and just swears.

After going to A&E that evening to make sure that their foot was not broken, the parent visited the police, who, after taking a statement and a copy of the video, went to the driver and got his statement


As result of his statement, in combination with the hi-definition head-cam video, the police are not going to prosecute the driver for careless driving or any other offence.

There is not, apparently sufficient evidence that he meets the legal standard of "driving without due care and attention"

If the family had actually been turning, and the driver had failed to give way to us -that is hit them- it would have constituted careless driving and he would have been prosecuted. But the driving seen on the video is not sufficient.

Furthermore, the cyclist swearing at the car as he thinks that he and his son is about to get run over does not put the cyclist in a good light. This means that any claim "they drove off as they felt intimidated" is defensible, even when that driving off includes over the feet of the cyclists.

Lessons for drivers
As for the cyclist
It also has some interesting implications:

Posted by Bristol Traffic at 15:17

Some questions for you:
1) why does your concern for your family not extend to insisting that the boy riding with you is wearing at least a helmet, if not knee and elbow pads?
2) What speed did you reach when attempting to catch up with the driver of the vehicle - I am hazarding a guess it was more than 20mph.
3) Were you concentrating fully on the road and all its associated hazards when attempting to catch up with the car - for example would your stopping distance have been sufficiently small to prevent collision with anything unexpected?
4) Where did your boy get left while you gave chase? Was he safe?
5) When you held onto the wing mirror of the car you caught up with, were you putting yourself in danger of being dragged along uncontrollably? Was this danger increased by the fact it was all taking place on a pedestrian crossing at the junction with an even busier road, and had the potential to put pedestrians in the vicinity in danger too?

You see, you may well initially have had a point in trying to demonstrate that the car driver in question was driving very carelessly when he overtook a slower vehicle on a road that most sensible people would think was too narrow and busy and hazardous to accomodate such a manoeuvre.

But your subsequent actions come across as extremely reckless, fuelled by your anger, and I am surprised you only came out of it with a minor injury.