We don't normally go to S gloucs on the basis that it's boring.

Nice to see that today, the driver of SWC scaffolds van HK15FYH / HK15 YHF decided to lighten up the journey of our tax dodger by not bothering to slow down for the roundabout.

This isn't a great junction, so the cyclist lined up for a right turn, waited for the traffic coming from the MoD abbey wood direction to go, then set out, slowly enough to be able to react to problems. Which was good, as you can see that the van coming from the left doesn't appear to slow down at all, not until shouted at.

If you look at the still, you can see why: he's got his shiny gold iphone six in his hand 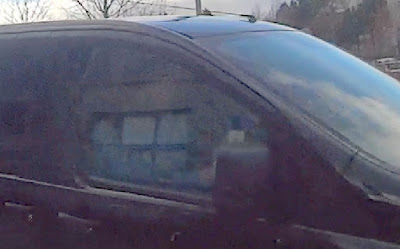 It's interesting to see the driver's reaction: they look up from the phone, look at the cyclist, then drive off, without even bothering to show a hint of remorse. 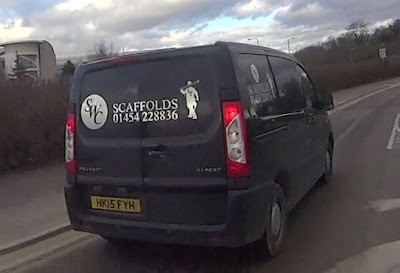 Which raises the question: report the driver to the police or not? Because that may be the only way to see some remorse, and perhaps even him stopping texting while driving.
Posted by Bristol Traffic at 16:29