This happens fairly regularly these days: a helicopter landing and then taking off from the BRI helipad. This is just the first time we've got a video of it from nearby Dove Street 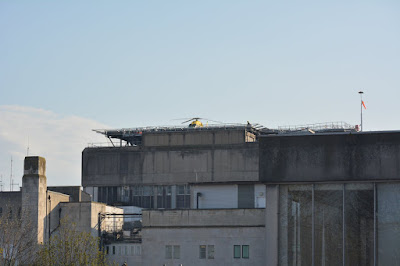 It's never a good sign, but apparently it doesn't always mean that its a critical emergency: apparently the helicopter works well as a way of getting patients from places like Plymouth or Taunton to the BRI without having to worry about an ambulance getting stuck on the M5.


This though, April 21 2018, the Great Wiltshire Air Ambulance bringing someone in from Pewsey, Wilts, "Medical emergency, helicopter conveyed to hospital". Hope they are well and enjoying the quality rice pudding which the BRI serves up.

The next day the team was involved in "Diving incident, helicopter conveyed to Decompression Chamber", taking someone from Chepstow to Plymouth. Busy weekend.

It's good to be in a country which has free, functional health care and a helicopter to take people which need that care to a hospital which doesn't ask for money. And, hopefully, doesn't ask for your immigration status to see if you are on Theresa May's "approved list".
Posted by Bristol Traffic at 20:48

A year or two ago I saw what looked like repeated practice take-offs and landings from Lower Maudlin Street. I still vividly remember how dramatic it looked and sounded. Hat's off to those pilots and staff.

Seen and heard one on Maudlin Street. Like you say: dramatic. Louder there than from Dove Street.