After spending a month with our strategic partners in a privatised-PCSO state, you soon get fairly used to the sight of Google autonomous cars. There's two types, the original Lexus models, and the smaller kitty cars. The latter are clearly designed to avoid scaring people witless that machines are taking over the freeway. It's as if in Terminator, the T1000 had been dressed up as a telly-tubby after being beamed back in time. Sarah Connor and compatriots would have been so busy saying "Oh, isn't it cute" to notice they were being shot to pieces by Skynet. 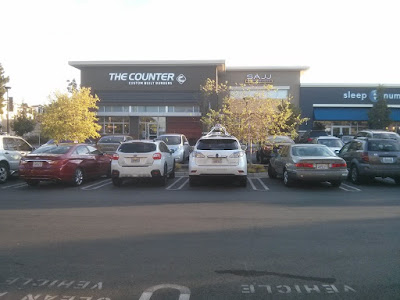 Maybe google should buy a kitty car and paint it up like Schwarzenegger in the final stages of Terminator & see whether it gets cut up less: an interesting little field trial.

So what's like to drive round town when there are these things on the route?

Here is one spotted during a morning commute on El Camino, the road where bus lanes are being opposed as autonomous cars will solve all problems. 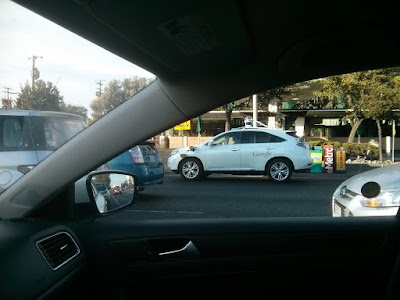 It is legal to use a phone while stationary, so this photo was legal. However, the photographer is clearly not paying attention. Nor are the two googlers in the lexus, as they chat to each other -but they don't need to.

Which promises a wonderful future, were it not for the fact that Google's entire computer infrastructure is built on the decision that rather than spend lots of money for hardware that doesn't fail,  just buy cheap boxes and let the software deal with the failure rate. For example, whereas even your home network store can be "RAID-5" for redundant data storage, Google's filesystem, GFS, just stores three copies of your photos and re-replicates a copy if one of them goes way or gets corrupted. That is: google accept things to fail and hide it from the user. Similarly, anyone who has ever owned a Google Nexus phone will know that they're as unreliable as a mid-1980s Mini Metro. A couple of months ago, Google shipped an update where the flash and the photo taking were out of sync. The flash went off, then the photo was taken after the flash had gone. What kind of QA process lets that out of the door? Unless they used the Volkswagen strategy, "detect when you are testing the phone and have the camera work", or their test image was a black object against a black background, detecting flash/snap synchronisation failures during the test process should be trivial. Which implies google did near-zero testing, but instead pushed the patch out over the wire -to their own Google Nexus phones- and then waited for complaints to come in.

Can you trust these people to build cars? Cars which are all required to reach their destination with their payload alive, rather than ones where its OK to have 99.3 percent arriving, and a paper "Failure trends in large self-driving car populations" of esoteric interest to those who work in computer hardware? Cars when you want things co-ordinated like the camera and the brake pedal, so it it sees a lorry coming it will stop in time, rather than 15 seconds too late?

It's not just that they're just out of their depth, they've made it a fundamental tenet of their system architecture: things fail, get over it. We'll hide it the server software, while client side we'll just push out an update once we get bug reports coming in.

Which means anyone who owns a google car would be reluctant to accept that update; you'd wait a week to see if The Register was warning of bugs in the steering or braking systems before you hit the "accept" button on a patch, that is, unless you wanted an emergency fix to some problem like "doesn't recognise oncoming HGVs"


Not in our photograph, to the left of our photographer, is someone in a Tesla-S electric car. These are the status toys of the electric world. Not toy cars like the nissan leaf, but performance luxury vehicles where the electric feature is not just to keep costs down on the commute, or to allow you in the car-sharing lanes when on your own, but to show off, "my facebook stock is up and I can afford to be smug".

The driver of the Tesla is not only looking down at their phone, they appear to be falling asleep while they do it. Every so often their head jerks up, not in the "I'd better look to see if the lights have changed" style, but in the "I'm falling asleep but shouldn't" style. Whatever their friends are up to on Facebook, it's not interesting enough to keep them awake on the commute.

So which future do we have to look forward to?


This is the future —and either way it's pretty bleak.

Posted by Bristol Traffic at 12:17