Governments have the most interesting data. Today: MOTs

There's a new web site. mot-history.net, which lets you type in any registration and make of a car and get its entire MOT history. Excluding cars < 3 years old, this means you can get the effective history of a vehicle.

This is fascinating, especially when you use it to look up the history of a vehicle you've sold on (*). 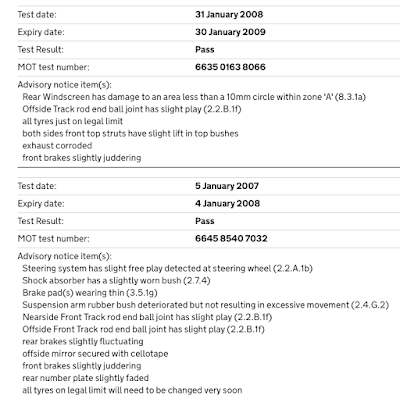 What is equally fascinating, is what is shows about things you can get away with. In particular, holding wing mirrors on with masking tape is not an MoT failure.

You can also get away with: tyres nearly worn down, steering in trouble (wheel balance?), suspension in trouble, exhaust corroded, small damage to your windscreen.

You actually have to wait a year, get those front tyres below the 1.6mm limit as it rubs slightly against the wing of the car before they say "no, time to fix the toy"

By May 2015, this car (WP53JVM, for curious), fails because bolts are missing on the wheels. 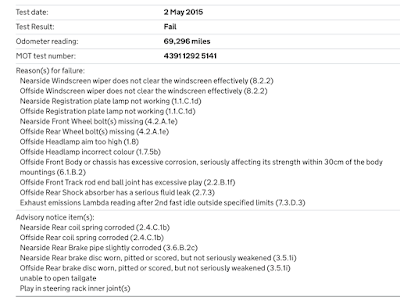 Now, you can argue about wing mirrors, suspension, etc. But driving around with bolts missing from your wheels? That's not just cause for keeping the car in the garage, that should be cause for arresting the driver for some offence related to driving in a way to endanger everyone nearby.

Anyway, it's interesting data, and you can get it for any car.

Which means you can now do some interesting data-science projects —including some which would be something schoolkids to do as "maths in the real world" projects.
The scariest thing to consider is this: the MOT certifies that a vehicle was considered safe by MOT standards for one single day. The car above could have been driving around with broken windscreen wipers, failing suspension and missing wheel bolts for 364 days before it failed its test. After being fixed, it now has another 364 days for its brake pads to finally wear too thin, tyres to wear out, those coil springs to finally corrode through.

Drivers like these are potentially some of those who complain about cyclists "not having MOTs on their bicycles". Well, with drivers like that, who cares about the state of the cyclists' bikes, other than whether or not both their brakes work? Because they aren't what you have to worry about, whether walking, cycling or driving. It's the people driving round the city in a VW golf with underbolted wheels, worn brake pads, failing suspension and defective windscreen and wipers.

To close, then: a competition for the weekend. Pick a car you see ~ 10 years old, put in its history and find out exactly what it's been failing MOTs for. We want the most dramatic reasons -and so far "missing wheel bolts on two wheels" is it.

(*) Actually it wasn't that vehicle, which was WP53JVO. Getting the last digit wrong turned up what must been another of the last batch of MkIV Golfs to leave the VW dealer.
Posted by Bristol Traffic at 14:11