If you go into a bike shop you can pick up a freebie map of where to cycle in the city —one that's actually good for walking and running too.

You can more easily get a map of where not to cycle. In any overview map of the city, it's the red roads on the cover, along with the junctions between them. 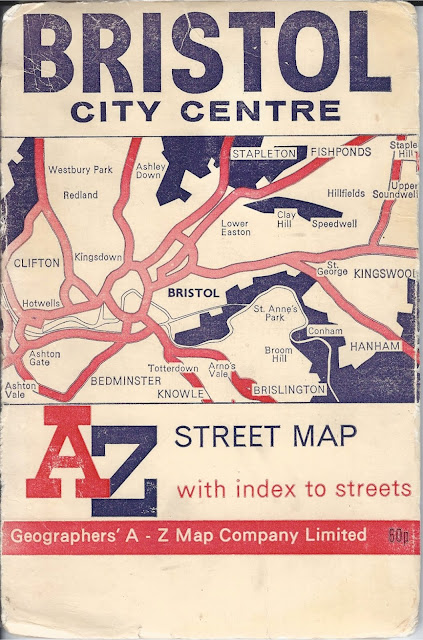 Which is quite a coincidence really, as those are, essentially, the locations of the Department of Transport traffic survey sites 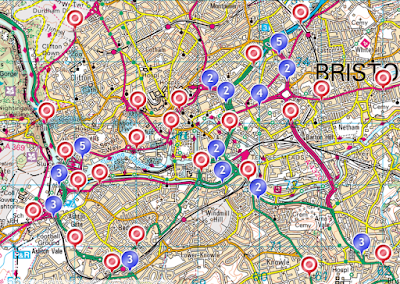 This is why the DfT traffic survey, showing a levelling off in cycle use, has to be treated with some scepticism. Frankly, if the number cyclists on the A370 and Cumberland Basin Flyover, or Temple and Newfoundland Ways was measured at more than zero, we'd actually suspect a measurement error.

Joe Steinsky tears into the numbers, with a graph we've stolen without any attribution. 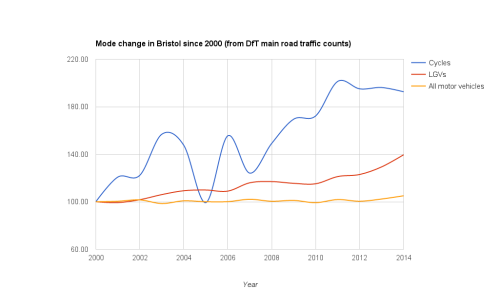 The sheer variance in that cycling graph shows its flaws —you have to worry about how meaningful it is.

Even so, it's going to be taken up by those people who find it supports their opinions. In Bristol, that's the usual anti-cycling lobby: the evening post, the evening post commenters, random twitter haters and conservative party council and mayoral candidates.

If you encounter it —don't be afraid to ask "where are the numbers of people walking or on a train?", as you aren't going to see any of them on the M32, A370 or Temple Way either.

Out of Bristol, the group people need to worry about is actually the DfT themselves. Their 2013 traffic model predicted a fall in miles cycled after 2015, the data they've published appears aligned with this, so helps congratulate their modelling team on their skills, perhaps promoting them to the DEFRA Flood Modelling project. Which is why the cycling troublemakers need to be pushing back on this, not just asking for the council to collect better data on routes such as the BBRP, suspension bridge, Create Bridge crossing (oh, wait, BRT2 killed that), Prince St Bridge (oh, wait, BRT broke that), the Chocolate Path (oh, wait, BRT2 again), but maybe the castle path, farm pub path, eastville park path, and up through Stoke Park to UWE, etc. And then advocate the DfT to include such data in their modelling of urban use. And include walking too. Because that's a legitimate form of transport and is as much at risk of neglect as the cycling.

At this point, the locals who sneer at Bristol traffic for being car-hating extremists will accuse of us discounting data we don't like, just as they themselves do with all climate change research that brings bad news, models that predict warmer winters with more floods.

For those people, know that we slagged off the survey the moment we encountered it in progress.

This is it: four people on a footbridge overlooking the M32. We faulted it at the time for being an inadequate way of measuring car traffic in a modern city. It is only this week that we discover that one of the people sitting there with a little "clicker" was waiting for cyclists and presumably getting bored at the inaction. 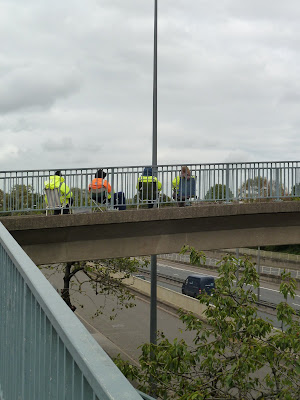 Four people sitting on a footbridge, counting cars on one single weekday in a year. And using that for the traffic statistics and future predictions of Bristol's road needs? That is not modern "data science". In fact, it's more of a practical A-level project —though even there you could do more with a camera and at-leisure replay.

Manually counting one morning in 365 just doesn't produce valid data. Was it a weekday? Which day? Was it a schoolday? Or was it half term with reduced traffic counts? Was it raining? Such experiments may have been a viable strategy in 1963, maybe even 1974 with the M32 open and three Austin Allegros an hour driving down the "Bristol Parkway" to see the shopping wonder that was 1970s Broadmead.

Nowadays, it's a historical relic of a process, no doubt hooked up to a traffic model that considers pedestrians at a junction "a cost", values cyclists as being worthless (OK, that still holds), and considers time in a traffic jam is as cost, rather than a valued quiet texting time between the office and the hell of parental responsibilities.

If you want modern data, throw the hi-viz tops off the footbridge, use the now-rolled out ANPR camera arrays to log vehicle movements, and start to do some decent analysis of the data beyond just "how many"
Ignoring the final question, which is more of social commentary than anything else, the other questions all directly define the motor vehicle use that's made of the city's road infrastructure. Information that could be used in some way, not just for better DfT modelling, but for moving traffic understanding beyond simple anecdotes.

Transport for London have a data team; they do churn through the oystercards, the C-zone stats: they do understand some of the use of the city? Not Bristol —and clearly, not the Department of Transport, who are still shaping the country's transport infrastructure based on four people and a clipboard.

[footnote: that cover is from a 4th edition A-Z. Look at its rendering of the inner-ring road and see if you spot what's changed?]
Posted by Bristol Traffic at 17:21

Latest figures from Bristol (here) show that the number of trips made by bike increased by 4% between 2013 and 2014.

According to the Bike Life report, the number of cycle journeys in Bristol increased by 4% between 2013 and 2014. You suggest that the DfT traffic survey, which shows a levelling off in cycle use, has to be treated with some scepticism. Please could you explain why you think this?

Essentially: survey methodology. We said when we first saw the DfT survey that it's hopeless at measuring anything. It's bad enough at measuring cars —is counting traffic on the M32 for one single morning a good metric? For cycling, the main roads are in general, bad places to measure. And if alternatives get rolled out, you'd expect people to move there, though again, a single-day survey isn't relevant.

w.r.t the Bike Life on: no information on the methodology, hence: no opinion. We don't think much of the Strava dataset though, it's bias towards mamil-roadies self-selects for routes that nobody else would take. Phone data from google would be far more interesting, and cover pedestrian routes too.

On the issue of how reliable or valid any given data set is I would say that we need to be very careful of saying that any one set is better or worse than another.

As far as the national data sets are concerned there is a useful web page here:

That page also has a link (near the top of the page to notes on what data have been used and how they have been collected.