There are always complaints in the cycling community (all eight of them) about some war-on-cyclists taking place in Bristol. We know that's untrue: the war being conducted in Bristol is by cyclists, against Motorists!

Here we one such example, a BMW driver going out of their way to give the cyclist a helping hand up the road

We've said before, that Bristol is split between those who like cycling and those who, well, hate it. 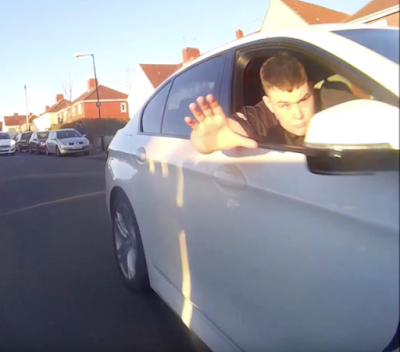 We suspect the driver of BMW MX64JWU may have been one of the people in the survey who expressed negative opinions about cycling. We may also suspect they aren't in favour of 20 mph limits.

Well, we always value those prepared to stand up for their principals, or here, lean out the window and try to push someone over for those same principals. We feel this driver should be congratulated with the publicity their action deserves. Does anyone know who they are?