CS11, the London Ringway and Hampstead

People paying attention to videos may note that more than one of our contributors have London accents. One actually has a South London accent, which is pretty shocking, but they've lived in the city long enough for it to no longer be something to apologise for. Another one of our team has a north-west london accent, the kind you'd get growing up in Camden and Brent. Their dark secret is even worse than having lived south of the Thames. They first went to school in Hampstead. (For locals, that little one opposite the tube station, under the everyman cinema, the one that still believes in hymns and things). 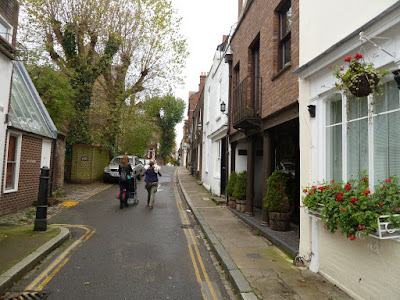 Eventually their parents saw the error of their ways and moved into West Hampstead, making their children walk to nearby ecoles. Under the gentle hand that was the Inner London Education Authority, swimming was taught at the nearest council pool: in primary school you got a coach. Come secondary school, they'd worked out a better solution: the kids were given the money to get the tube during lunch; if they made it to the swimming lesson they'd get the money to go home. This presented the children with two choices: take a tube from Kilburn to Swiss Cottage, or walk to the pool eating the bag of chips you'd just bought with the fare. Tough decision.

What was never considered was cycling from the school to the pool. Because that would involve negotiating the Swiss Cottage gyratory, a multilane mess which you had to cross to get to the pool or library, getting there along Finchley Road, the "A41" coming down off the M1 by way of Staples Corner and the North Circular. It was tube or foot.

In London: the tube is the mass form of transport for anyone near a station. It's why what zone you are in is a marker of house prices, "They can afford to live in Zone 2!"; distance from tube station advertised because it makes such a difference on your daily commute. Off-street parking? Maybe for those few houses that have it —but it's not useful for commuting anyway. Not only is there nowhere to park, and congestion fees to worry about —it's significantly slower than the tube.

Driving to work, at least if you work in Central London, is a minority form of commuting. That's even if you have a fancy job in the city: it's not that likely to have a parking space. 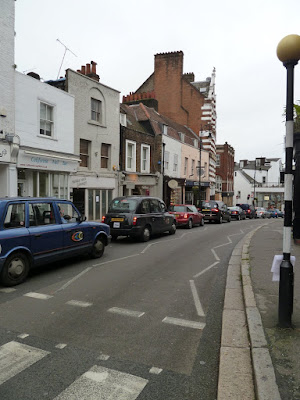 This is perhaps a reason for the volume of taxis in London, they're an exclusive form of travel for people who don't have parking spaces but can afford to sit in traffic jams. By outsourcing the sitting behind the wheel swearing to people from Essex, you can check emails on your phone, only at the cost of many pounds per journey.

The rise of cycling in London, then, is arguably a consequence of dissatisfaction with an overcrowded, expensive and unreliable tube, recognition that the bus service was worse, driving even more stupid and getting in a taxi a transport for the wealthy people with time on their hands. 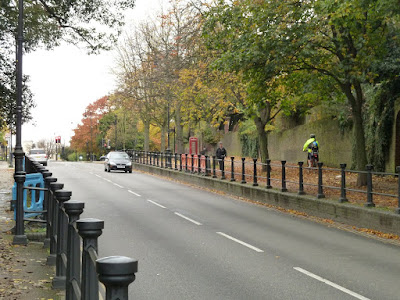 Nowadays central London has a massive proportion of cycle commuters, those who are happy with a city worse to cycle in than Bristol, those who have learned all the back ways which are mostly survivable. When the new embankment and bridge segregated routes open, central London will show the rest of the UK cities how far they are behind, even Bristol, so proud of itself, can't do a pedestrian crossing of the Bearpit in less than a year, the Templemeads to Bemmy path is missing-considered-deceased, BRT2 has stolen bits of path and parkland, and then there's the centre and Baldwin Street. London is leading in both vision and execution. Which, when you consider the wanker in charge of it, quite saying something.

What London is doing is setting a baseline for the rest of Britain, for cycling and even, with Crossrail, what you can do for public transport. Bristol now needs to step up, making it pleasant to cycle across the city centre without you having to rehearse in your head a safe route and factoring in you won't have a clue what to do by The Centre, and that Templemeads hates cycling.

London needs to step up by moving out of the centre, to make it survivable to get in to the city, to make walking and cycling an option for people who live outside Zone 1. For a hint of the difficulties here, look at Vole O'Speed's coverage of Brent. As visitors to Brent with the "Love Bristol, Go Brent" campaign, we can assure people that he's actually upbeat about the prospects for cycling in Brent.

And Hampstead? With its primary school off a traffic jam of taxis? What hope does it have? 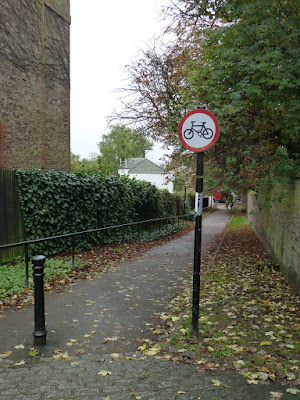 In CS11, it has the chance of a safe route to cycle from Swiss Cottage to the city centre, a feed in route for everyone in north west London. If you can get by bike to Swiss Cottage, you can carry on to your destination know that you'll be alive when you get there. Instead of having to text your loved ones "I'm at work, I'm fine!", you'd be able to text them "I'm on CS11, I'll live today!".

Except of course, the residents of St John's Wood don't want it, as it will make driving to Hampstead harder. And they are leading Britain's Backlash.

The comments are absolutely worth reading. Take this one from "Craig", resident of Hampstead village for nine year. He is complaining that a cycle lane a mile away will devaluation the properties in Hampstead. That's an area where they are asking for £1.7M for a a flat, £3M for a house. So Craig, nine year resident, is worried that the resale value of his house will drop, by, what? a thousand pounds? Ten thousand? Because really it'd have to be a couple of hundred thousand pounds worth of devaluation.


And here's the irony. The sole reason that he has his £3.5M house is because in the 1970s, people fought to stop it having a motorway over it. 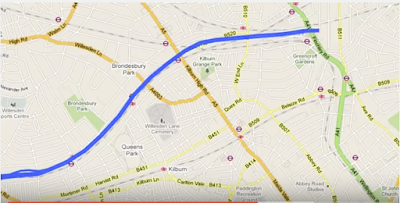 If the GLC had got its way then, the quaint little houses of Craig and others would be in the shadow on a par with London's Westway, a faint miasma of NOx and diesel particles infiltrating the house, adding extra flavour to the coffees their Nescafe-coffee pod cafe macchiatos, creating more traffic on every single road, and generally making the area even less pleasant to live in —as if having it full of people like Craig wasn't bad enough.

That was what London dodged: The ringway over Hampstead. Instead they got the status quo, which, with the vast cross-london school run, the emergence of diesel as the fuel of choice, killing those kids from NOx and lack of exercise. And yet these people don't want change —they expect to be able to drive round the city. First the school dropoff then on to the underground parking at Waitrose John Barnes, on to the gym for your spin class, up the road to pick up the children (Walk to school! Have them use public transport! Never!), then nip down to central london for a play or two, parking at westminster being outrageous, but well, so's the mortgage on a little Hampstead mews house, as is theatre tickets, what's another £30 on the evening —why, it's the amount of tip the au-pair would expect, isn't it?

Apparently there's a demonstration of support for the proposal on Friday, March 11. Us: we'd be more tempted to head to the anti demonstration to see who it is arguing against them —because they sound like the Donald Trump supporter of transport.

To close then, one last opposition comment: we can't have cycle paths in our cities because we have road, not canals.

If CS11 gets stopped, it'll because of people like this.

Posted by Bristol Traffic at 20:39