We were shocked and disappointed that we were unable to drive to Clifton in our Important Car, then cross over to Somerset and enjoy a round of golf with Liam Fox MP. Why? Tax dodging cyclists in the road —out road, blocked off to us,Important Tax Paying people, handing it over to olympic medal winners and the like. 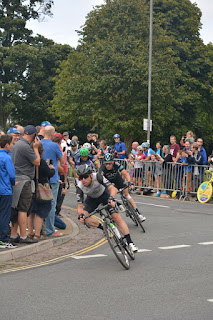 Lycra louts who do things like blow their noses in public 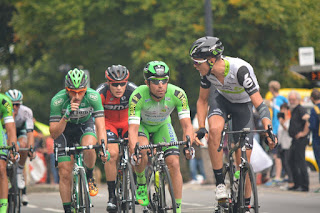 If there was one redeeming feature, it is that a lot of other people were as upset as we were to see this lycra-clad vermin —and they were standing there screaming at them for bringing the city to its knees. 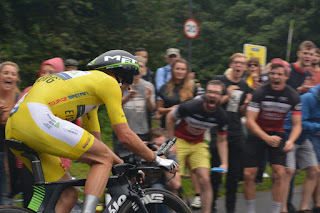 We we trapped in the city. Clifton was even begrimed with a large screen showing off that the portway and Bridge Valley Road had again been stolen. 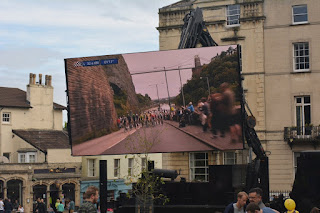 This is exactly the kind of thing people voted against George Ferguson wanted to stop, but still the city wants to let people cycle around.

It's fundamentally wrong. Look at this scene from The Promenade 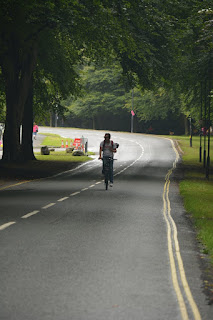 Where are the revenue-bringing shoppers? Or the high-income tax band residents? Nowhere. Just one person on a bicycle who probably lives in a postcode other than BS8.

If there is one redeeming feature, it is that Clifton Village is still not set up for more than six bicycles at any time, as their three sheffield racks were overloaded. Some of the tax dodgers even went as far as leaning their bikes against the wall of The Mall pub and trying to buy beer inside. 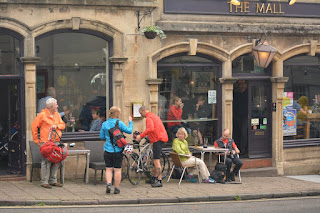 This is not some run-down bicycle friendly part of town where you can lean bicycles against walls; it is trying to stay upmarket. Fortunately, most of the cyclists in the area realised they were unwelcome and cycled off to other parts of the city once the event was over, leaving us nearly the only people walking round an near-empty village. The fact that village was so empty shows precisely why such cycling events must be prevented.

But how to do this? We were going to spin up our automated cyclist-hating letter generator and have it email the Bristol Post. But what did we see on the Downs? 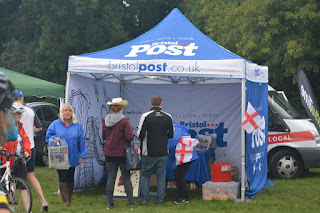 Yes —shocking, isn't it! Our paper, the one that hates cyclists, actively trying to sell copies to cyclists!

We fear that the Evening Post has, purely in the mercenary need to sell to people under the age of sixty, has decided to start trying to ingratiating themselves with tax dodgers. They may think that will help them, but all it will do is alienate their current readership. It'll be like when all the pubs in Hotwells, including the Spring Gardens, the Pump House and the Mardyke suddenly decided they wanted to post gastropubs instead of places to get drunk in and start fights with strangers. This isn't progress: this is a sign of the decline of the city.

Posted by Bristol Traffic at 18:06