Causes of Congestion in the Greater Bristol Area: hint: not 20 mph zones

What has made congestion in and around Bristol worse —for those people driving or sitting in buses?

we can argue about whether @georgeferguson_x did things to make traffic worse;

RPZs didn't; they add more passing places to the narrow roads, and if they discourage people from driving in, could reduced traffic levels. 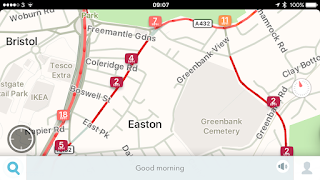 One key point is that if the average speed in a road is 2-7 mph, as Stapleton Road is enjoying, then 20 mph is an unrealised dream. It's not the problem. Question is: what's causing that delay?

The main factor is the number of people choosing to drive. Evidence of this comes from looking at the M4 heading away from Bristol, which is going at 12 mph. 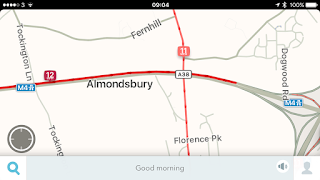 By choosing an away-from-city route we can avoid blaming metrobus related roadworks or buildup from urban congestion. There's none of : cyclists, bus stop buildouts, traffic lights or 20 mph to blame rather than accept the root cause of the traffic jam is the decision of you and others to get in the car that morning.. 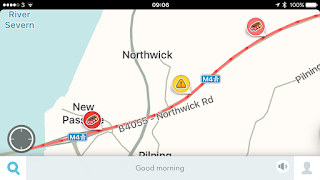 It's people driving places. Which may be correlated with population growth, and the growth of north fringe sprawl housing and offices. North Lockleaze, or, as it pretends to be, Chiswick Village? New. Those fields north of the A4174 by Emerson's Green? Houses you get to see from the M4. That's a change: more suburban housing, more people driving around the city.

Traffic lights? They have a worse (but fairer) throughput compared roundabouts; see Modeling Roundabout Traffic Flow as a Dynamic Fluid System (skip the pictures and look at the pics on P8-11, knowing that "flux" means "number of vehicles arriving per second"). Essentially, all of junctions overload, but two-lane roundabouts get the most through.However that paper assumes that you can get off the roundabout, which as we know at peak hours (Hello Bearpit! Hello St Pauls Roundabout!) doesn't hold. Furthermore by modelling traffic as an incompressible fluid, they miss out on the game-theoretic aspects of the problem, as in: why you'd pull out in front of other vehicles, even if you know it will block others.

Because one problem roundabouts and traffic lights both have is people blocking junctions, so . If anyone has evidence of yellow-hash do-not-block zones ever being enforced, we'd love to see it. We lack that evidence. What we do believe is that it would reduce junction deadlocks and so boost cross traffic. Again, evidence would be good. Perhaps the council could run an experiment —like enforcing the law for a week.

Fast moving cyclists? Nope. They just go past the queues and have an average speed above cars at peak hours. This clearly upsets some people who resent the fact that they have to drive a Fiesta 1.1L up the A38. We would hate driving a Fiesta 1.1L too, even on an empty road.

Cyclists at under 12 mph? No data. They are easy to pass when there is no oncoming traffic, so as the overall traffic volume increases, get harder to pass. Having bus lanes and functional (i.e. not blocked by parked cars) bike lanes, lanes considered safe enough by cyclists that they use them would eliminate that problem. And, if parking spaces taken away for them, reduce justification for driving in.

Oncoming traffic? This is a problem in much of the inner city: there isn't space to get through down a road in the presence of oncoming vehicles. As well as traffic volumes, we have to consider whether the rise of the Urban SUV amplifies the problem. Not only does that oncoming Volvo XC 90 on the school run take up more space, the VW Touran parked alongside the Audi Q6 means that there is less open road to play with anyhow.

Roadworks? We know about those, especially: in the centre, on the M32, along the A4174, the A370 and by Cumberland Basin. Hopefully they will be transient, as in "fixed before 2020" 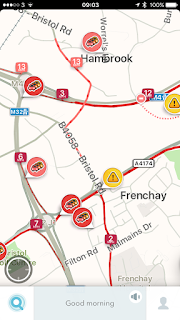 One thing is for inevitable: the cost of delays caused by these roadworks won't have been included in their already broken cost model.

When that Metrobus work is finished, will the problems go away? Not without some fundamental change in how people get into the city —which means that you need a compelling story from places like Yate, from Portishead, and the other dormitory towns. A railway from Portishead here is potentially compelling, because you get a direct line to Templemeads without traffic delays.  It's a shame that central government beliefs (trains bad, BRT viable) and local government issues (naive optimism) have caused a focus on FirstBus as a solution.

Will Metrobus be compelling for those actually in its catchment area? We have no idea whatsoever. Which gives us something in common with the metrobus team.

Anyway, to close: for anyone saying "it's the 20 mph zones", or "its the traffic lights", we say "explain how the M4 moves at 12 mph on a weekday morning?"
Posted by Bristol Traffic at 12:44

The day after I read this, I saw two PCSOs reminding drivers about how box junctions are supposed to work. This was at the junction of Quakers Road and Bromley Heath Road.

From what I overheard it was in response to complaints (presumably from local motorists)...

good, box junctions hurt other drivers more than anyone else; and can create actual "gridlock", though that really needs a grid to generate the full loops. That said: it's essentially impossible not to block roundabouts with lights as you can enter them when green, then block them when the light needed to progress goes red. Bad attempt at retrofitting "scheduling fairness" to a design (i.e. giving everyone a chance to pull out, even if nobody exits into their arm of the junction).