There's a growing scandal in the press that an undercover policeman infiltrated the group Reclaim the Streets.

While we do not approve of the activities of these tax dodgers, we can't speak highly of the police infiltrating a group of lentil-eating- ippies just because their activities brought the traffic in city centres to a halt at peak hours. 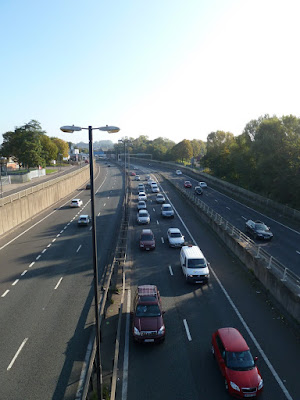 If bringing the city to a halt a peak hours by blocking the streets with your vehicle is a crime -then we are all criminals.

Look at the scene above: the M32 after 9am on a weekday. Brought to a halt. Is this a crime? No, it's commuting. the only thing wrong here is that we can't use the hard shoulder even though everyone is only doing 15 mph.
That's one reason we don't approve. Where will they draw the line? Start with the hippies, soon they will be trying to find out who kept torching speed cameras, attending meetings of the Association of British Drivers and keeping an eye on us patriots. 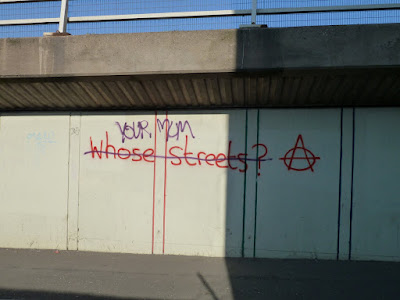 The other reason we don't approve: it's a complete waste of time and effort.

Imagine the the uncover police team christmas party as they all get together and discuss how they protected the nation from its enemies, inside and out
You'd be laughed at and be so embarrassed you'd find excuses not to go to the following year's party. It's the bottom ring of undercover police work, worse even than that dire film Kindergarten Cop where Schwarzenegger goes undercover as a school teacher. At least he didn't have to cycle round south London on a three person bicycle where the one at the back powered a loudspeaker.

It's just not impressive. It's not the thing you sign up for is it? That's the really shocking thing: the government could be bothered to infiltrate these groups. We wouldn't. Especially now the Bristol Cycling Campaign have stopped holding their meetings in that room above the Cornubia Pub.
Posted by Bristol Traffic at 14:23