BMWs cost a fortune. And this one, LF52XBW, parked up on the pavement on Gloucester Road today was being eyed up and photographed by more than a few people today. Hence the security looking after it. 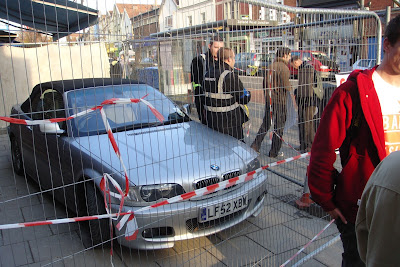 But why was it there?


Well, it's complicated. The bit of road that runs between the Bear Pit and Filton Avenue changes names a few times - North Street, Stokes Croft, Cheltenham Road and Gloucester Road. It's Bristol's premier cycle commute route, and home to a Bristol Showcase Bus Route. The people that inhabit the road rather like its independent feel, free, mostly, from the anodyne 'High Street' shops and outlets so pervasive of most British towns and cities. The residents tend to kick off a bit when corporate idiocy tries to impose its muscle on the local populace.


Ergo, today there was a bit of a protest outside the new Costa Coffee which is apparently illegally opening on Gloucester Road. It seems franchise holder, Stuart Montgomery, plans to ride rough-shod over Planning Law and open a new outlet here, having been refused planning permission to do so. The complication is not that he can do it, but that it is not until he does it that Bristol City Council can serve an enforcement notice*** on him to cease trading. 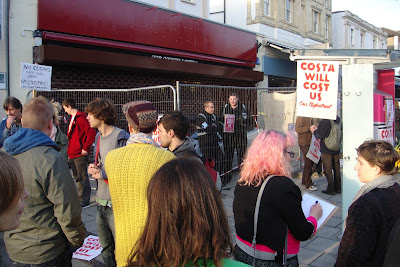 Local councillors Jon Rogers and Gus Hoyt turned up, along with MP Stephen Williams to register their support for the protesters in front of both HTV and the local press. The usual anarchist protesters also daubed chalk on the pavement, even after the politicians had left and the police had arrived with their CCTV van. But this is middle-class Bishopston, so no trouble. 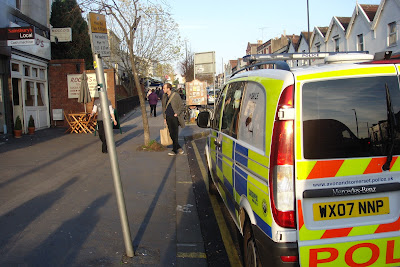 Back to the BMW though. Why was it there?


The best suggestion I heard was by Jon Rogers, who asked, "Is it the prize for the first person to buy a coffee here?" That, of course, will allow the Council to force the apparently unwelcome franchise to close. 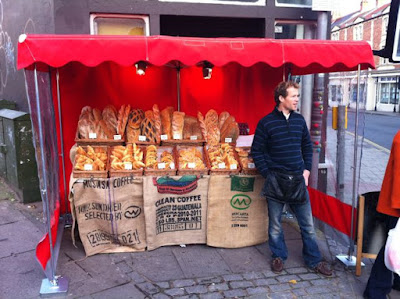 On a lighter note, though, there is a new, independent, Bread Stall down the road in Stokes Croft, outside the old Sofa Riot shop, not competing with any existing business except Tesco. Now even the transient student population can get decent bread without having to use a multinational minimart.
*** He recently tried the same trick in Whiteladies Road, where, we hear, an enforcement notice has been served by BCC after he opened a Costas in the former Derbyshire's newsagents premises. Of course, enforcement takes time, so business is being done.
Posted by Quercus at 17:33

BMW parked up on the pavement?

was this private property, if not, was action taken by either the local council or the police for illegally parking on the pavement?

Expensive BMW? If nothing else shows how much Costa customers are ripped off. Little change from a fiver for shit coffee and factory cakes.

Say no to Costa, you know it makes sense!