Never park up the inside of an HGV

The militant cyclists are saying "It's not our fault that HGVs kill us -they shouldn't be there", and now they even have the Times on their side

We, and our sponsors, Tesco, say "HGVs are needed in our city to deliver an optimised supply chain, if anyone gets run over by one it is their own fault for being on the inside of the vehicle"

This is why a lot of cycle safety training in London is dedicated to make it clear to people on bikes that they are invisible from a cab of an HGV, so should never go up alongside them, or end up in an ASL in front of one.

We have another group of people who need to be better educated. 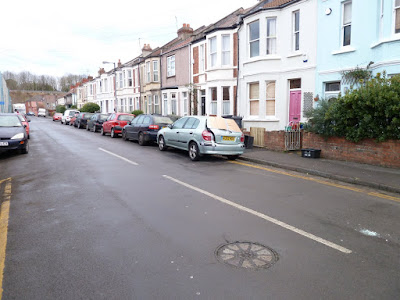 If you were in Montpelier, a car with its rear window replaced with cardboard and big scrapes down the side wouldn't get a second glance -but here we are in St Werburghs. What is up? 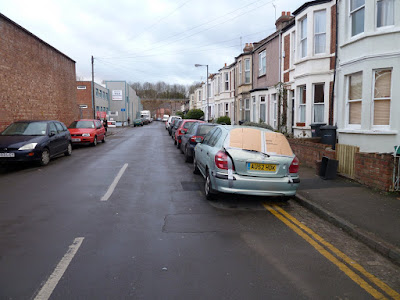 Apparently, the owner of this car dangerously parked their car on the inside of an HGV.

The HGV -entirely innocently, as the car was hiding in its blind spot- scraped down the side of the car, caught the rear bumper and pulled it off. It also clipped the rear hatch, pulling that up, bending it, and in the process shattering the window.

Why did this happen? Because the car driver, recklessly, parked their car on the inside of where an HGV would go past some ten hours later. For this reason, it is their own fault.

We say: people like this need to go on a "safe parking near HGVs" course, rather than complain about passing trucks from destroying their vehicles. At the very least, they could use that spare space to the right of the picture, the "pavement".
Posted by Bristol Traffic at 07:30

Sometimes drivers are to blame, and sometimes not.

Many years ago, I was working on a small industrial estate, with a narrow approach road with a sharp right-angle turn and regular deliveries by articulated lorries - HGVs.

The corner had double yellow lines for good reason. The Artics could only just negotiate the corner if the corner and its approaches were vehicle-free.

One day, somebody parked a car close to the corner and unsurprisingly an HGV arrived. The driver got out, looked at the car and in those pre-mobile-phone days, walked to the steel fabrications business where his delivery of steel-plate was to be delivered. Shortly afterwards, a forklift was despatched from the fabricators and it lifted-up the car and moved it. The HGV was then able to complete its delivery.

I presume this must have caused considerable damage to the car, but as far as I know, nobody really cared.

YOU HAVE ABSOLUTELY NO IDEA WHAT YOU ARE TALKING ABOUT BUT MOST IMPORTANTLY YOU ARE DIFFUSING TOTALLY WRONG INFORMATIONS AND
I'M ACTUALLY AMAZED AND VERY ANNOYED THAT YOU CAN DO SUCH THING AND USE PHOTOGRAPHS THAT ARE NOT YOURS AND USE THEM AT YOUR WILL TO ILLUSTRATE YOUR POINT.THIS VEHICLE WAS MINE AND WAS PARKED (NO ONE WAS IN IT) LEGALLY ON THE ROAD AND THE DRIVER HIT MY CAR WITH THE BACK OF HIS LORRY.I WON THE CASE WITH THE INSURANCE (OBVIOUSLY) AND HAD 3 WITNESSES TO CONFIRM THE INCIDENT.INSTEAD OF TALKING COMPLETE NONSENSE YOU SHOULD CHECK THE ACCURACY OF YOUR FACTS MR SO CALLED BLOGGER. THE FACT IS THAT OVERSIZE LORRIES SHOULD NOT BE ALLOWED TO ENTER SUCH NARROW AND TIGHT ROAD AS THEY'VE CAUSED SEVERAL INCIDENTS OF THE SAME NATURE IN THAT STREET.I HOPE YOU'LL HAVE THE DIGNITY TO PUBLISH MY COMMENT AND DIFFUSE THE REAL INFORMATION AND NOT WHAT SUITS BEST YOUR CASE. THE TRUTH IS THE TRUTH NO MATTER WHAT YOU MAY THINK OF IT.