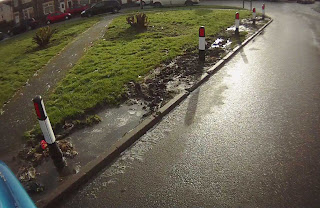 The following course notes are for the level 3 students taking the Urban Decay module of the Physical Geography:The Human/Car/Tax Dodging Cyclist Inter-Relationship in the Outside World (year 2) course.

New research by a team from Bristol Traffic has identified the mysterious cause of cars getting stuck in mud around Bristol. Apparently, the interaction of water falling from the atmosphere on stuff called soil weakens it to such an extent that it simply can't bear the weight of a car and so leads to lots of slipping and skidding. In extreme cases, shown in photograph 1 above of a well-used vergeparking facility in Staple Hill, the local council has stepped in and erected some soil stabilisation bollards to warn motorists of the risks involved.

Photograph 2 shows the formation of more soil instability zones and may lead to the closure of the vergeparking facility with more soil stabilisation bollards. 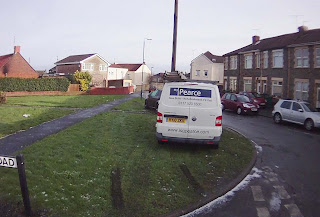 Current research suggests that an asphalt build-out to replace the green grass stuff might increase subsoil stability and avoid the closure of important parking space.
Posted by mnpinkfloyd at 12:37