According to the evening post, opposition in Montpelier and St Pauls is rising to the point where civil disobedience is contemplated. Already we have an unnamed pensioner pushing for active resistance: "We need to paint out the lines and pull down the signs."

Well, being able to park outside your house is a fundamental right -and when you consider that the troubles in Northern Ireland grew out of a failure of the civil rights movement there, it is better to accede to such demands before they get out of hand. 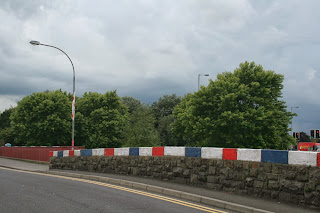 Even so, hopefully the area will go for rasta colours on the kerbstones, not royalty.

We'd like to highlight a particularly insightful solution to the problem from "Pogo_T_Clown :

Given the tendency of communities to descend into NIMBYism when they're tasked with self-policing, I think this is a flawed idea. However, I do believe that it would create quite a burden for the council to determine the needs of each street in the city. As such, I would suggest a "Street-twinning" system where, for example, a street in Clifton would be twinned with one from Bedminster. The residents of the Clifton street could drive over to Bedminster and provide an objective view on the level of parking required. The people from Bedminster could catch a series of buses to Clifton and return the favour. This would save the council money and improve ties between the communities in Bristol, which could only be a good thing.

This is an innovative approach which we hope the leaders of The Parking Rebellion embrace.

Posted by Bristol Traffic at 17:47