Clifton may call itself a village, but it is not rural

Some revolutionaries exploited some known PHP hack and defaced the travelwest web site.

Cue cause for coverage in the guardian, Muslim Hackers take down bus schedule web site, including describing how people resorted to facebook to ask the Arab Security Team what the schedule for the #8 bus is.

Well, it's good for Bristol to get some coverage in a paper written in London but sold nationally. Sadly, the paper covered the story with a photo of a stock bus stop in the rural road middle of nowhere. This is surprising, as we'd expected at least one of the paper's unpaid interns to have studied somewhere in the city.

For future reference the #8/9 bus meanders round the northwest bristol urban areas, with Clifton is furthest point in its orbit from its terminus, Bristol Templemeads.

Here, then, is an authentic Bristol #8 bus. Sitting at templemeads with the lights out and no cue whatsoever as to when the bus engine will be spun up and passengers able to get to their destination. 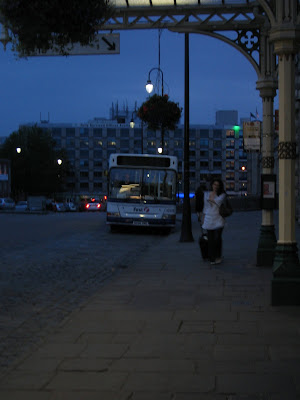 This, and non-determism of Bristol traffic flows, mean that if you live in 30 minutes walk of BTM, then, even if you are on the #8/#9 bus line, you are better off walking, except when one or more of the following conditions are met: its wet, you have luggage, you have a child with you. Even there, given child fares are non-zero in Bristol, walking with a child is still appealing.

As for Clifton being a rural idyll of empty roads: no. The residents may imagine it is a village, but only by the same criteria that stokes croft could consider itself a village: it was one a couple of centuries ago. Avonmouth village has far more villageness.

Dear Guardian: when you next want a photo of a Bristol bus stop -please get in touch.
Posted by Bristol Traffic at 17:22