Bristol is getting a new City Gateway: one in the middle of the city.

The phrase "city gateway" should be a warning sign; it means someone has focused to much on some "urban realm" and new visitor experience rather than useful.

The only direction to be coming from where the "city gateway" would be the first thing you see of the city is if you are coming from the train station and have never visited the city.

In this situation, what would you rather see:

Because Bristol has two public transport city gateways: the bearpit and now this. And unlike the bearpit, we don't fear gentrification here, the Brunel pub suddenly serving beer you can drink, or open air pop-up cafes in front of the train station. (yes, we know about gateway 3, the underpass for walking and cycling. Another day)

But wait! people say, we are going to get a new showcase entry to the north of the station.

That entry point exists already. It's very convenient pickup/dropoff point today, because nobody else knows about it and you can pull off Temple Way early and stop right by the entrance.

It's also known by the cyclists as the way you can get to the station without being run over, the way you can get out without being run over on the way back, and where you can collect pre-ordered tickets from a machine which will only issue them to you if you have both the card and a six-character reference number. Given that you can check in for a transatlantic flight needing only the credit card, we are still trying to determine what security requirements mandate a significantly stricter policy for issuing tickets between Bristol and Bath, but we are sure it makes sense.

The cyclists gain from being able to get to the Bristol-Bath railway path, which is signposted 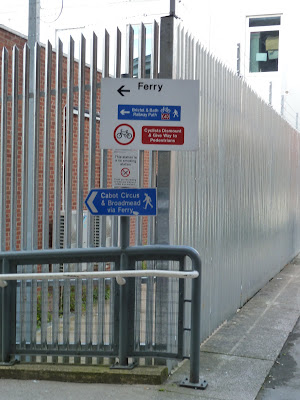 That's it, the blue one above the no-bicycles and "Cyclists dismount and give way to pedestrians" sign. That's our favourite, as it makes clear that even when they get off a bicycle they are still the Untermenschen of our city, the only ones we can discriminate against until UKIP come in to power and we can ban anyone muslim from the M4.
emplemads.
Anyway, cyclists can get to and from the railway path here. As this is the site of the most recent templemeads access point redevelopment, let's look at it and see what the last designers did in terms of making walking and cycling in Bristol better.

It starts at the Cheesegrater, one of the two Bridges added in the twenty first century. These are the showcase walking and cycling bridges to Templemeads. We'll get back to them after the tour.

Here then, we cycle across the Cheesegrater Bridge, as if the Untermensch were coming from the railway path, go past the "Untermenschen get off and respect your superiors" turnoff, where the Untermensch turns right, along what is currently a wide cycle route separate from the footpaths, and which will be upgraded to "new route for station dropoff". That is good, a bike path that wide is wide enough for a road: its what it needs. And we know from the rest of the area, that cyclists and pedestrians will share a pavement provided there's a sign telling the cyclists to dismount.


Carrying on from there, Herr Untermensch continues along past the "wet wood with afterthought traffic calming when they discovered people were actually cycling over it bridge", or as we will now call it "the rattling wood bridge" Then: along the river. This could actually be a nice route to the city centre, except that its existence is kept a secret. Even the pedestrian signs to Cabot Circus don't direct people this way, not when there's some main roads to walk past. Oh, and a new "city gateway" of course. In theory, then, this riverside walk could be made a walking and cycling "city gateway", one that took people to Cabot Circus and even the new Broadmead, whenever those plans surface. This path is also the most direct route to the Bus station, 15-20 minutes and traffic free the whole way. Maybe: but Bristol has always been proud of the inner ring road, "temple way", and should celebrate it. On bike, an Untermensch will eventually reach the Counterslip Road where they can see that the council would rather provide three parking bays on a bridge than any form of cycling infrastructure. Just something to bear in mind whenever someone talks about a war on motoring: we still have those parking bays on the bridge on Counterslip Road.


Finally, down some steps and along the remainder of the path to Castle Park. To summarise: a quiet route from the station, which with some minor effort could me made a gateway to the city:

Finzal's reach will address this by adding a slightly different bridge, one to the west. As you can see from the consultation, this will be a curvy bridge, like Peros' the cheesegrater and the slippery wooden one.

There've been some mixed feelings about this. The cycling campaign felt that the route wasn't designed to take the cycling traffic volumes which would be seen if the councils goals of numbers of people cycling were actually to be met. On the other side, the Bristol Civil Society came out against it, because

Finzel’s Reach Bridge would not be the choice of most people walking or cycling between Cabot Circus or the Old City and Temple Meads Station; they would choose to cross Bristol Bridge or St. Philip’s Bridge.

This surprises us. Certainly people walking and cycling choose to use Bristol Bridge or St. Philip’s Bridge, but that's because "those are the two bridges they can use", especially when "the nice route by the river isn't known about by all". They also chose not to critique the bridge for the reason we would, which is

we are sick of architects trying to give us fancy bendy bridges as they don't appear to work. Given Bristol's history of being built around a bridge, being internationally renowned for its suspension bridge, can we have some bridges which now actually meet their design goals of "getting people over the rivers safely"?

Which brings us, in a roundabout way, back to the Cheesegrater. This is a bridge which has warning signs telling people not to cycle over it when wet, and even for pedestrians to take care. Think about that.

Now look at the implementations we've had in C21

Valentines:
Surface: wood, slippery when wet or icy, rickety
Shape: S-shaped, for no apparent reason other than someone thought it was innovative
Designed for: walking and cycling
Not suitable for: anyone trying to cycle over it while someone else is walking over it
Amelioration measures: stick up some barriers over the bridge to discourage anyone actually trying to cycle over it.

Cheesegrater
Surface: metal,very slippery when wet or icy
Shape: S-shaped, for no apparent reason other than someone thought it was innovative
Designed for: walking and cycling
Not suitable for: anyone trying to cycle over it when it has rained in the previous 24 hours
Amelioration measures: cyclist dismount signs.

There then, are the two features we have had in terms of innovative city gateway work near Templemeads in the past 15 years. Two bendy bridges that completely fail to meet their design goals. One could just be misfortune. But a second? Didn't someone from the design team look at the first and consider how had it failed? Or did they just say "yes, bendy bridges with slippery surfaces are fashionable, let's do one too".

They didn't, did they. Which means that there are civil engineers out there who are still being allowed to build things. What we fear is this: they are involved in this new Templemeads work.

Whatever happens: we have to make sure they weren't involved in the new Templemeads "city gateway" as we know its not going to work, even before looking at the designs.
Posted by Bristol Traffic at 22:50