Earlier this week, David Cameron said there should be no means of communication which we cannot read

That's pretty significant. Because, as some subversives have pointed out, internet communications is locked down via HTTPS and other protocols that encrypt their data, often using the RSA Public Key algorithm to do it. Which relies on the fact that, given a big non-prime number, it's "computationally very hard", to determine which two prime numbers can be multiplied together to produce this number.

Thus, in order to stop people encrypting their data in a form which the government cannot read, they are going to have to ban prime numbers.

A number which is forbidden to be discussed, shared or published on the web is known as an Illegal Number, the 09F9 key to decrypt blu-ray disks being a notorious example: a number where everyone publishing it initially received an DMCA takedown notice. Certain prime numbers can also be considered illegal, such as one which is actually the x86 linux binary code to decrypt a DVD.

All Cameron is proposing, then, is expand the list of Illegal Numbers, to some other numbers, specifically all prime numbers. That's a big list, so we'll shorten it by providing a set-theoretic definition of primeness:

That is all numbers n in the set of natural numbers Naturals, for which there do not exist two distinct numbers p and q in the set of numbers 2..n such that p times q equals n.

There: simples. And stopping terrorists sending messages the government —ideally a government led by Boris Johnson with Nigel Farrage as his deputy— cannot read is common sense.

Except, well, it's not going to work, not without bringing down The Internet As We Know It.

Which would be somewhat inconvenient. 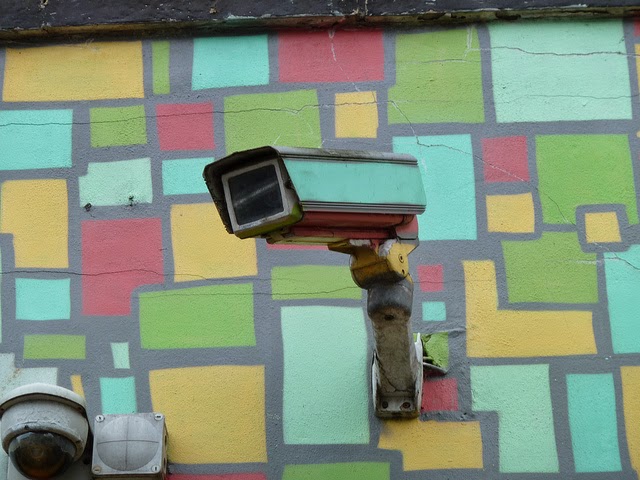 We've stated before that we are building a modern police state, a datacentre state, at an undisclosed location in stokes croft. Some of it is being rolled out, such as these undercover CCTV cameras near the Moon Pub. Some crimes don't merit hidden speed cameras enforcing publicly displayed limits, other crimes,  like rolling some locally grown weed —do.

Because we are a small police state of our own, we have agreed to try out the new "no encryption policy" before it is rolled out nationally.

We do however recognise that encryption is critical to functionality of the internet, so will allow small primes —anything below 2^8. That is, only primes >= 256 are illegal.

We have issued our local PCSO with a list of all of legal primes, and given them a new power. As well as being able to fine cyclists for cycling on the pavement, they are now permitted to inspect phones and other computing devices to see if they contain prime numbers greater than 255. If so, the criminal will be arrested then deported to the Avonmouth detention facility (formerly: Portway Park and Ride) for The Duration of The Emergency.

Our PCSO will also be allowed to stop and search anyone, in case they are "Prime Number Mules", trying to sneak large prime numbers into the area in USB sticks hidden in body parts. We won't go into the specifics.

Be advised, because connecting to facebook or twitter uses encypted HTTPS connections, even when done from their phone apps, driving while texting is going to have to be made temporarily illegal —banned until our strategic partners release "Stokes Croft editions" of  the applications.


To catch these possible terrorists, we are now recategorising cyclists such as here, RedVee, from "tax dodging scum", to "guardians in the war on terror". They are now permitted to report such incidents as the one above, in case the culprit is not a "hard working motorist", but instead "threat to society". A&S police will look up the vehicle registration, determine whether or not the driver is Muslim, and take action when appropriate.
Posted by Bristol Traffic at 13:51