Bristol vs Self driving cars

One little sighting over by our strategic PCSO-state partners, Google, are their self driving cars.

They are utterly not-ready for Bristol. You can see this at a glance 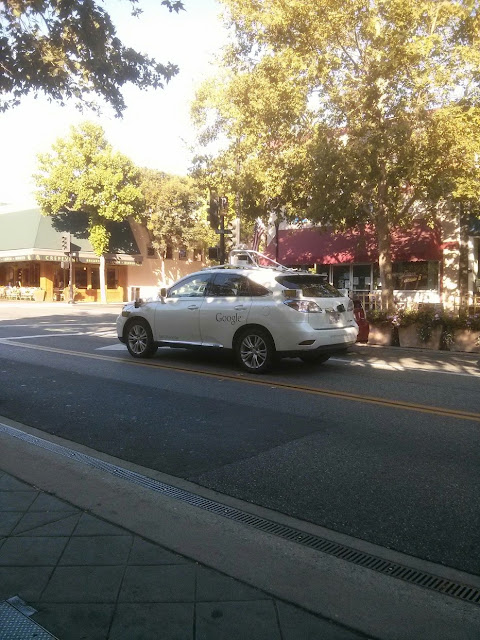 Not only is there a bollard on the roof, there appear to be sensors coming out of every corner.

Here in the city centre we have a word to describe vehicles with wing mirrors attached: visitors.

While having wingmirrors helps you in certain out of town operations, primarily changing lanes on the M4, in town it actually hurts you: it makes your car about 30 cm wider so significantly reduces your choices as to where to drive. And, as their presence broadcasts that you are not a local —but instead have a vehicle you care for— you lose every negotiation that takes place, be it a junction or a "who will give way first" interaction. And, when parked, you don't have to bother looking out the window when you hear the sound of a car-on-parked-car interaction, unless it is so loud that you fear it may be some damage needing bodywork repairs.

Now put something on every corner of the vehicle whose presence is actually critical for the self-driving feature to work. Sensors attempting to detect what is too close, so the multi-layer neural network that is is google self-drive program can make a decision as to what to do next.

That's before even looking at what complexity of road the cars are exposed to. This road, "Castro", is a complex environment on the basis that it actually has people walking. Yet it is wide-enough for oncoming vehicles to pass each other, all junctions are nice simple right-angled crossings, and visibility is reasonable.  Now imagine taking a car trained here and trying to drive down Clifton Vale, the one with the blind z-bend you have to share with oncoming traffic. The car would just give up. And it would share the experience with every other google car, saying "avoid this road". Before long whole swathes of the city would be blacklisted by Google cars, cars who give up on account of their paintwork and external mounts being valued.

Which, when you think about it, could be no bad thing

Posted by Bristol Traffic at 15:45