One of the recurrent themes in the UK press, with the Daily Mail-esque "Speed Cameras steal from motorists" story also recurring in the US,

Usually there are people quoted demanding instead real police, in real police cars, catching people "really" breaking traffic laws —by which presumably they mean "people other than themselves"

What doesn't get covered, though is how scary it is to be stopped by the US police compared to those in the UK. In the UK you get pulled over with some opening gambit like "is this your car, sir?", or "how much have you had to drink this evening?".

In contrast, in the US the lights go on so bright, with such a loud siren that you look up from your phone with a jerk, to see the police car filling your mirror and pull over in fright. Only here, the police officer (almost invariably a white man) walks over with their hand near their gun, ask you to wind down the window and then keep your hands visible, all the while standing a bit behind the door so that you are in front of them and its easier for them to shoot you than vice versa. 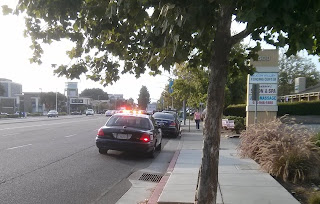 It is frightening, and you have to be so careful not do to anything not to make them overreact, and reach for the gun. And that's just as a white adult male in a nice car in a nice part of the US.

Now imagine you are an 18 year old black american being stopped at night. You know the police have a track record of shooting black americans even when pulled over for "minor traffic misdemeanours".  This is a country where failing to indicate as you change lanes has a death penalty.

You are going to be scared whenever you get pulled over, if you look at the statistics from places like Ferguson, you will be pulled over a lot more than white americans, and the is a small but tangible risk of you not getting out the stop alive.

While in suburban americans may scream about unjust and unfair traffic cameras, you might find some locals with different opinions. Ask black americans kids whether they'd prefer being stopped by the police with a risk of being shot or having traffic violation fines sent in the post —you may find more support for the cameras. Now ask their parent, those parents who worry about their children going out for drives at night in the US, and they may give a very different answer.

Traffic Cameras: they don't shoot anyone

Posted by Bristol Traffic at 08:00