According to the Evening Post (so it must be true), the Mayor's Car was driven into a bollard that should have got out of the way.

We extend our sympathies to the mayor -but at least he doesn't have to resort to public transport, as he has managed to sort out a replacement. We hope the bollard has third party insurance to cover this. If it was in any way damaged, it is the bollard's fault for being in the middle of the road and not being covered in hi-viz.

If the car really is written off, it may only be remembered in its two Bristol Traffic articles, one showing secret cabot circus parking, and another by a pub.

Let us mourn it. It shall not grace our pages again, 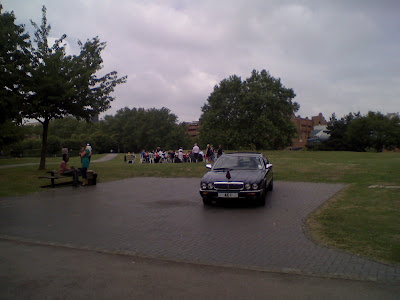 Regarding all those very unsympathetic comments where everyone seems to be against getting a new car on the basis that buying a second ford-fiesta with a non-personalised number plate and selling the AE1 plate off would actually earn money - fails to recognise the symbolic role of the mayor. Like the Crown herself, the mayor is a powerless figurehead whose role is to attend meaningless publicity events in vehicles that reflect the fact that the UK is a fading power.

As for the comments that the mayor should be riding a bicycle, remember that Cllr Gollup is the offical evening post spokesman of the Bikelash. He does not cycle.
Posted by SteveL at 02:32

Manchester is doing it's own thing at http://manchestersadvanceddrivers.blogspot.com/

You completely failed to mention the elephant in the room: was the bollard wearing a helmet or not?