The MTBers are all happy there's a new all-weather trail being built in Ashton Court, with some EU anti-british money going in to encouraging cycling.
We had hoped "all weather" meant "horribly muddy all year round", but apparently it means "with drainage"
At the end of the newly uprated "blue route" by the quarry-in-the-park that is an odd feature of Ashton Court, we can see a boy perfectly executing the new jump at the end at full speed, and getting airborne in the process. 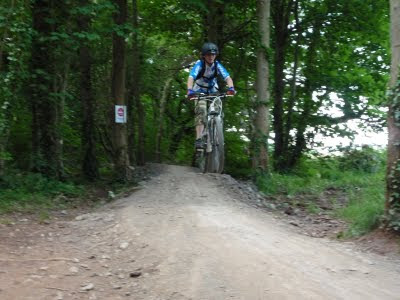 Apparently earlier in the month someone else trying it out managed to get the logistics of which part of the bicycle should land first (wheels down, head up) wrong, and ended up being ambulanced out due to concussion and/or other injuries. We hope they recover.
For now then, we consider this jump formally christened as "ambulance leap", and will warn the adults going out to enjoy it that it doesn't matter how much you spend on a bicycle, kids who spend time on a BMX park can do things you can't. Money is not a substitute for skill, and skill comes by putting in the hours.
Posted by Bristol Traffic at 07:37

Just out of interest, will the length of this route be included in those claims of "200 miles of new cycle lanes made in Bristol this year" that we see in glossy PR leaflets?

@workbike the signs don't say so, they credit the Forestry Commission and the EU rural dev funds. Ashton Court is odd in that its a Bristol City Park, but in North Somerset territory. N Somerset hate bicycles as the cyclists get in their way into town on Coronation Road and Hotwell Road, which is why they do nothing to encourage them.