For all those entrants to the Friday Quiz: behind the purple fence with the no skateboard or ball games signage is a temporary car park. Temporary. We need something more permanent.
This is why it's exciting to hear that the infamous plot six, the now defunct post-office-railway-integrated sorting/delivery office may well be turned into a multi-storey long-stay car park, and not, as some troublemakers demanded, a transport hub for buses, trains and bicycles. 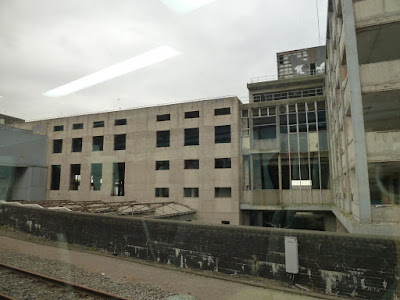 Providing an integrated transport hub here would merely encourage people to use train+bus, or train+bike, and not offer the revenue opportunities of, say, a five storey car park.
Two issues
We praise the Waltham Forest Faction of Bristol council for their plans, and the assistance of North Somerset and S Gloucs councils.

On this topic, we saw an article recently arguing that the suburban dream in Bristol is in trouble. The actions to improve driving options from North Somerset show that this is false. What has changed is this: the important people in the city, rather than live in the fringe suburbs, have moved out of the city altogether, into the picturesque towns and villages outside: Portishead, Clevedon, Wotton-under-edge, etc. While public transport to the fringe of the city is collapsing, those with money still need to come in, and the increasing use of road space by cyclists, resident parking schemes and expanded pavements is anti-capitalist. It is critical that Bristol Council -who would otherwise pander to their electorate- recognise that the true wealth of the city depends on these out-of-city commuters, and meet their needs: fast wide roads, low-cost in-city parking. The Plot Six and South Bristol Link Road are only part of what we need.
Posted by Bristol Traffic at 07:29

Sorry to be picky BT, but Plot 6 is on the other side of Temple Meads and is mostly at the moment a rather grubby car park.
The Post Office site on Cattle Market Road has been designated an enterprise zone.
http://www.bristol247.com/2011/06/08/temple-meads-to-be-transformed-by-enterprise-zone/

Can a multi storey car park be described as enterprising? I think not. It's as dull as dish water.

Let's also have a plug for the excellent Bristol Wood Recycling Project who are already enterprising very well there all ready. http://www.bwrp.org.uk/

To be fair, the Coronation Road cycle path (or the corrugated pavement with trees and broken glass, as it should be more accurately described) is a complete waste of space for cyclists - riding on the road is much quicker!

@Tim: Coronation road has been covered, presumably the cycling advocates wouldn't be pushing for that specific bit of infrastructure as part of a joined-up cycling city

@Dave: thanks for the correction. If it is the bit to the north, then yes it is a grubby car park. But it is a covered one a short distance from the station, and so invaluable.

Yes more mooring by BTM would be useful. Parking my 20 metric tonne 65ft narrow boat can a chore. I would however like to make a bid for good bus to boat linkages so that I can get beer easily back to the boat from the excellent Thumpers Off License in Staple Hill or from the Beer Factory itself in Southville.

No, there is no easy boat access to Staple Hill. Were the Frome to be re-opened to traffic from the Watershed, things could be different, and you could even get to Tesco Eastville. If and when you do a trip to the Grain Barge to stock up, photos would be welcome. Bath Ales do deliveries, incidentally.