The Coronation Road bike path is a source of excellent photographs. It is also an item of regular contention in the comments section of evening post articles, the key comment being "why aren't you tax dodging cyclists using it instead of holding us up", apart from when the comment is "why are you cycle terrorists trying to run us pedestrians over all the time"
Well, we sent someone on a bicycle (it's OK, it was a Sunday) to ride the route. At the Bedminster End, we can see some tourist signs clearly marking the split between the pedestrian area (on the right), and the cyclist route -the faded markings to the left. 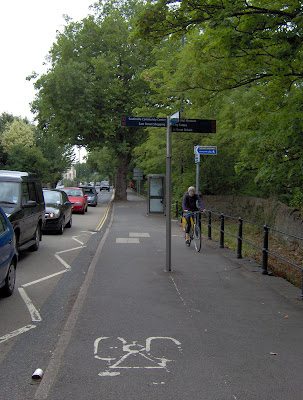 The approaching cyclist is on the wrong side, though the presence of the Bristol Traffic van (we were unloading the bicycle) may have been a factor. Note, however, the new signs up on the walkers side showing them the route to the Malago stream/footpath/bike path. We aren't entirely sure why anyone walking or cycling would cross just there, rather than at the pelican crossing right behind the camera, and we aren't convinced that signage was something this path was short of.
Anyway, on to the path. As you can see, the presence of large trees down the centre of the path does complicate things, as do the lamp posts, the road signs and other pavement features. Fortunately, for both us drivers and those cyclists, there no 20 mph signs. This road is deliberately kept at 30 mph, because the council recognises it is a key traffic route in and out the city, especially for somerset commuters coming in on the A370, A369 or even A4/Avonmouth Road. Since the council stole the Queen's Road dual carriageway, this is a faster route to drive to the Templemeads area from the nice places out of town.
Because of its critical nature as a key traffic route, it is essential that cyclists stay out the way, yet many of them don't. This video of the cycle route shows that anyone complaining about it is a whining troublemaker who should be grateful for what they get doled out for free. It also shows that they have forgotten the time when the path stopped at every tree and diverted them roadward, not pavementward. This not only annoyed the cyclists, but could inconvenience us drivers too, so we are slightly more pleased that now it is the pedestrians who are held up.

The big problem is the trees, not only do they force cyclists to swerve into the pedestrians lane at speed, they hide the signs in the middle of the path behind them, and could increase risk at night, especially from unlit cyclists. Fortunately, the many street lights positioned in the middle of the lane reduce the risk of a cyclist not seeing any of the many pieces of street furniture. Furthermore, there are now banners up round the city encouraging cyclists not to cycle without lights to reduce the risk of them hitting any of the trees here. 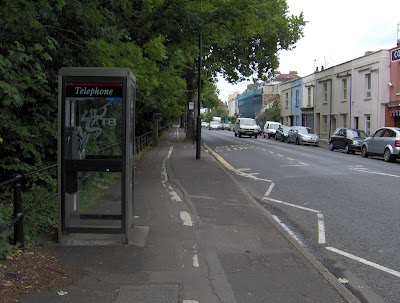 Looking back, we see no alternative option for this road. As we have seen from the Muller Road build-out which attempts to provide a safe cycle route on a main thoroughfare, that just creates congestion on a key access route for the city.

A better option would be to remove this route, and ban bicycles from Coronation Road. Even if they do cycle up the path, we know later on they will be in our way, in town. Saying "No bicycles welcome here", sets everyone expectations up clearly, but this this path only does it halfheartedly.
Posted by Bristol Traffic at 07:44

ugh, for me the big problem is not the trees, but the poor quality of the pavement, i wouldn't mind having to slow down for trees if it were a nicer ride, right not it is a disaster.