Lots of fun following the Kingsdown RPZ plans. Apparently the local councillor is getting lots of hate mail. We think he should be grateful for the publicity, and considering how much grief his colleagues got on the Sainsbury's Ashton Gate proposal, be glad it's not death threats.

Anyway, the plans are going ahead. Some places may be removed as parking options. Even before the zone is rolled out, someone is ticketing cars parked on non-double-yellow lined pavements, such as here on Spring Hill. Now, this is a narrow road, and with the steps on the pavement either end it's hard to negotiate when there is a car in the way, but this is the summer holidays. The kids are out. This is a lovely bit of traffic calming, yet T198NEF gets to pay a parking ticket, for parking in a way that wouldn't raise an eyebrow in Monty, except the distance from the wall, the two wing mirrors and overall bodywork state would say "outsider". Here on a weekday in Kingsdown, it says "resident". 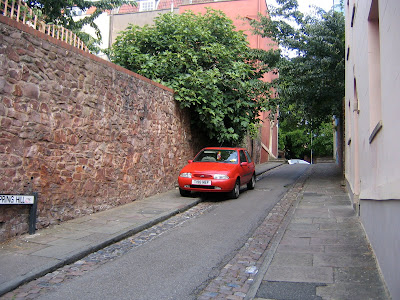 This is where we differ in our opinions from the No Group. They say "everything just about works, keep parking free". But does it work?  Because it doesn't take that many tickets on your car to justify the cost of a residents permit. So parking isn't really free, is it. It's only free if you don't get caught. That's like saying driving round is free because you don't need a tax or MOT. Yet those DVLA cameras watching us, watching the entries to the city, driving round the back street, find us, eventually.
Posted by Bristol Traffic at 14:45