One day in the week, our drive up Nugent Hill was interrupted by this woman pushing a bicycle with a small child on it up the road. 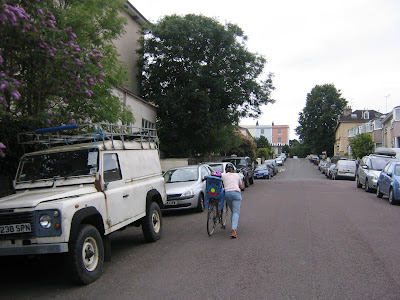 Madam, if you are going to push the bike up a hill, could you make it Ninetree Hill, which, having already been closed to cars, is not disrupted by a cyclist walking up it. 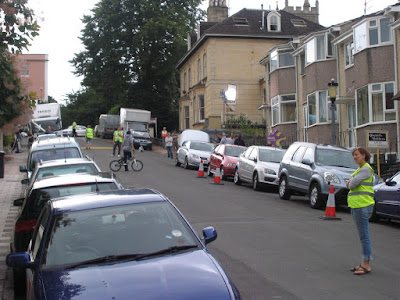 Later on in the week, something worse. The entire road closed while officials -in hi-viz- make some film shoot which apparently required no adults in the shot, and cars blocked from this road while these teenagers pretended to play.
Such media coverage will only reinforce the myth that teenagers should ride bicycles and roads are a safe place for them to do it. It is a an affront for our TV licensing tax to be frittered away on pro-cycling propaganda!

Still, if there is one thing that takes the edge of this offence, it's the Copenhagen Cycle Chic people complaining their roads were taken away for car adverts.  That evens things out.
Posted by Bristol Traffic at 07:28

Well done for highlighting this iresponsibility as anything that gives people the idea that children should freely play on residential streets should be stopped. What chance does the average SUV driver have of spotting a child in the way or stopping in time? The high bonnet and vehicle size is to protect our precious children in the back seat whilst we safely drive them to school.