Keeping the Abbey Wood shared use paths in good condition

Drainage Services are busy up by the MOD Abbey Wood area in the North Fringe, keeping the drainage in a bit of S. Gloucs well drained. 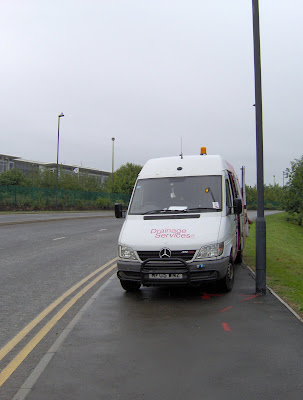 Some people might think that it is somewhat antisocial blocking an entire bike/foot path when the dual carriageway alongside has almost no traffic, at least not until the tailspin housing estate sells some more houses.
But think about it. Badly drained bike paths force cyclists into the road, where they could interfere with us. 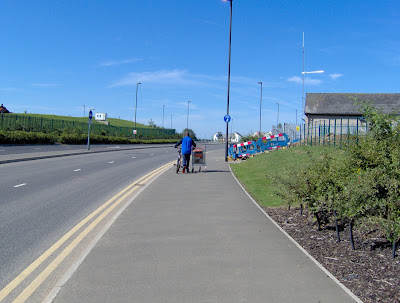 Furthermore, this particular path enables a combined bicycle and supermarket journey, in which the shopper cycles to the A4174 Sainsbury's and pushes both the bicycle and the shopping trolley home. This is not possible on on-road, vehicular cycling routes. These people should be grateful for getting such an open bit of pavement to share with pedestrians, even if we hate them on the other pavements.
Posted by Bristol Traffic at 06:14