At least that's what an IT guru for a large construction company once told me after I'd told him I couldn't run anything ending in .exe, because I was using an Apple Mac. Still not sure what his point was, however...

With a new government comes early adoption of some clear and sensible thinking on at least two fronts.

We like this. After all, we're careful drivers when we want to be, and with the cameras gone we can concentrate on cutting up the tax dodging cyclists at speed without fear of retribution. We might even be able to take out a few jay-walkers and get away with it too.

2. No more clamping on private land.

Again, a brilliant move. We'll be able to park on anyone else's driveway without fear of intimidation and extortion. 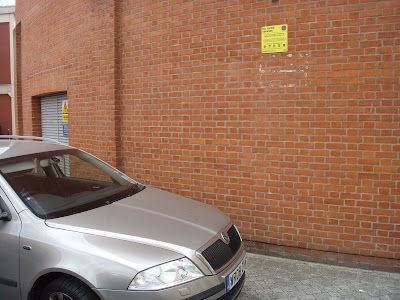 So we're particularly impressed with these early adopters, Skodas WR08OVK and WM08EZH, who've ignored the sign promising they will be clamped, and managed to spend quality time outside an ex-IMAX without being clamped. 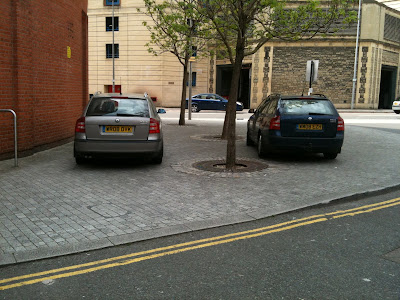 Here at Bristol Traffic we believe it's important that we manage to catalogue these vital new parking opportunities, as they come on-stream, so that we can sell them to the wider driving community at a later date (for a profit, of course).
Posted by Quercus at 07:00

If people do not want social motorists parking on their private land they need only to install barriers at their own expense. This is good for the economy, particularly our ailing steel industry who can produce these instead of cycle stands that there is not a big market for.
Imagine how pretty the IMAX pavement and driveways across the land will be with the sculptural output of our industrial nation. It is not called street furniture for nothing.