Men: bicycles are not the answer to your mid-life crises

We like seeing Bristol on TV, and right now the TV show that has coverage is the BBC's Mistresses, one that shows pretty women driving round the city having extra-marital relationships with men who are also driving round Bristol. Got that? There's a link there: cars=sex.

This fact is important as there a lot of press right now saying that the new mid-life crisis toy is not a sports car, a motorbike or a woman half your age -it's a racing bicycle. These articles are appearing both in proper papers and socialist rags.

Men: whatever issues you have in later years -  a bicycle will not solve them.

You may have seen the Tour de France, seen Andy Schleck go to-to-toe with Contador in the Pyrenees, and thought "I could do that", but sadly, you can't. You just penalise the rest of us.

Oh yes, it sounds nice, and makes for some articles showing shiny bicycles against mountain backdrops, such as here, Crater Lake, Oregon. Oh yes, you can dream of such things while stuck in the traffic jams on the A370, or the M32. But look at those mid-life crisis cyclists. Has it really solved their problems? No, they just fill their lycra clothing too much for everyone else to enjoy, and have strange looking legs. The one on the left: drinks too much beer for that top. The one on the right, scrawny, and apparently has not only continued with his bicycle obsession, gone on to come in at #5 in the veterans category of US Cyclocross rankings, and dragged his daughter in that same obsession.

We even get stuck behind them in the mountains. 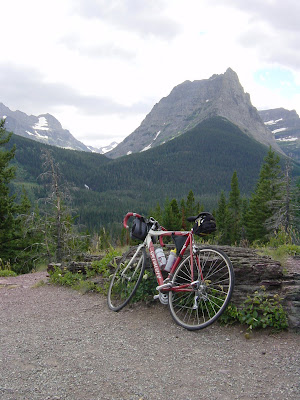 The photo above may look nice, but this is the Going to the Sun Road,  the road from the opening scene of the Shining, the only road through Montana's Glacier National Park, a road that last month the Guardian listed as one of the "must visit" roads in the US.

Yet it is somewhere a single mid-life-crisis roadie could hold up line of Recreational Vehicles, each of which could be towing an SUV carrying a quad bike and a jetski. There to enjoy nature, to bring revenue to the area, not faff around pretending they were six again. At least in the US, they recognise this and ban bicycles in summer, but that just means these people ride up illegally. Whoever took this photograph was not only a tax dodging cyclist, they must have illegally ridden up this mountain pass which is rightfully kept free for important people. Us.

Yet still they come, naively believing that spending money on a bicycle, some silly clothing and then pedalling round the mountains is a noble thing to do.  Then there are these "sportives", which is where hundreds of them come out and block through traffic, such as here, on the RAMROD "Ride around Mount Ranier in One Day" event.

As the cyclists block our roads -here there are even signs up to warn us of the inconvenience- the rest of society pays the price of your inability to settle into middle age with a few beers in front of the TV.

For all those men who have been spending too much time loitering around at Fred Baker's, Mud Dock or that fancy shop at the bottom of Park Street, print out this article and read the points below before you fritter away your money.
Think about it. Open topped fast cars have a purpose, road bikes don't.

More on this topic another day. In the mean time, we are watching you. Act your age -get a sports car.
Posted by Bristol Traffic at 07:55

Very funny and an accurate observation !!

Middle aged men are perfectly designed for open top sports cars. A heavy and low slung midriff balances a mid engined car perfectly and the lack of hair stops it blowing around annoyingly in the wind. Even the typically red face does not look out of place when sun scorched. Well done again Bristol Traffic for confirming what really gets the opposite sex going.

I'm female, not middle aged, not looking for the opposite sex and own a two seater sports car.. and I use the roads that are pictured on your blog.

I'm 24 and drive a 'cheap but flashy sports car', my colleague is 23 and has a carbon-fibre racing bike.

Which of us is having more of a mid-life crisis, and does this mean we're going to die aged 50?

I'm 39 years old and would like to die at age 52. Does that mean the road bike I was riding at age 26 was an inappropriate mode of transport? I rather enjoyed the company of the 26 year old I was with at the time.

We have no data on the advantages/disadvantages of cycling in your twenties. What we do wish to criticise is those who fail to grow up and still use them twenty years later.