We hear a rumour. We hear that the council will soon be offering errant cyclists caught cycling on the pavement a choice between the on the spot fine, or some training courses to get rid of their fear of cycling on the road.
We are against this, because (a) everyone should be fined for riding a bicycle, regardless of where it is, and (b) we don't want anything to encourage more cyclists on the road. That's why we drive the way we do, cut them up closely, drive right behind them to intimidate them. Anything else would encourage more of them out there.
We are also worried that if the police/PCSOs start hanging round junctions, like the Cheltenham Road/Bath Buildings junction, they might look at other issues, such as this tax SF51LDU driving into the ASL on a red light. 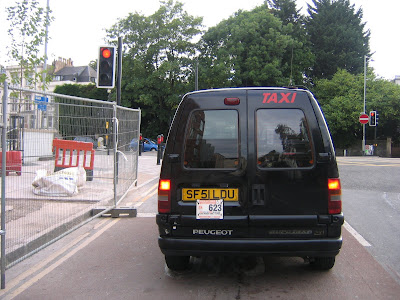 We do not to be penalised for doing things like that, and if the police start waiting to spot troublemakers, we might be the victims. 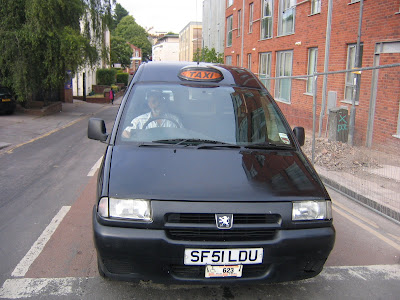 Now, some people may just dismiss this as an idle threat, but we've read the real press release, rather than just the EP coverage, which has the bad news

If the scheme is deemed to be successful it will also be rolled out to include motorists who drive or stop in cycle zones (eg parking in cycle lanes or purposely stopping into advanced cycle lanes).
Life Cycle UK will be designing a cycle awareness course for motorists. Again they will have the chance to attend rather than pay the fine.

Scary.  Punishing innocent taxi drivers like SF51LDU by making them sit through some presentation about why cyclists matter, or pay the fine. We'd go for the fine, ourselves.
Posted by Bristol Traffic at 07:15