When the M32 was built it was known as the Parkway.
Probably because the authorities of the time thought it would be nice to call a four-lane highway after the type of land it was built through. 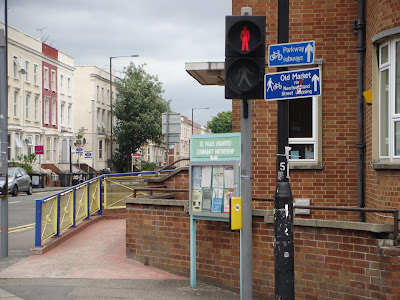 Remnants of this era linger on despite the upgrading to "M32", and downgrading to 30mph in part, and the installation of a central bus lane.

What concerns us though, is the sign "Parkway Subways", here in City Road.

The Parkway has been known as the M32 for over twenty years, and Subways has only been selling sandwiches in this country for about 10 years, so who put this sign up?

We have a sneaking suspicion that  Bristol Cycling City was planned when the Parkway was built, and has been waiting, like a Cold War mole, for the time to strike. Further proof is here in the Old Market sign which is for pedestrians and cyclists. Although if you do go there these days, you'll need to watch out for the busses.

It's either that, or Subways have had a secret presence here on UK soil since the 1960s.
Posted by Quercus at 10:57