We care, we really do

Some web sites have been a bit critical of us, arguing that we should obscure the number plates of photographs of vehicles in our coverage area, rather what we normally do -type in the registration number without spacing for easier indexing, then tag the entry with the road and district within the city or "abroad" for anywhere out of town.
Sadly for those privacy activists, registration numbers doesn't constitute private personal data, and EU/UK data protection legislation doesn't kick in. And as it's a public street, privacy rules and human rights stuff doesn't either. Were, say the son of Oswald Mosley to pay prostitutes to dress up in army uniforms and beat him while speaking in German on a street in Bristol, he wouldn't be able to argue that it was an invasion of his privacy to put the pics up online. So there you go. You want privacy, do things like that at home, with the shutters closed.
Our biggest issue is not just that cyclists don't have number plates, but that pedestrians don't either. Take this small child enjoying the swings in lower Kingsdown -an area to be covered in the RPZ. There are two cameras covering this play area to make sure that no children misbehave by doing something hazardous like using a swing without a helmet. 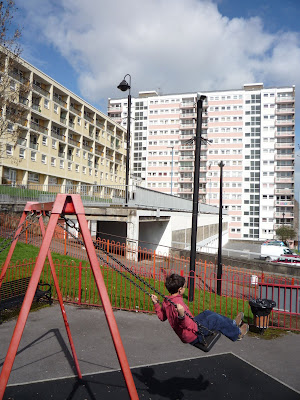 Yet how can you enforce non-misbehaving legislation without every child, every adult, having a machine readable registration number? How else can you see if they are paying their fare share of road and council tax, that they don't have a track record of hit-and-walk scrapes against parked cars on the pavement, and other crimes which pedestrians are capable of?
We are with Crap Cycling and Walking in Waltham Forest here: not only should every pedestrian have a registration number (apart from those walking directly between their car and destination), but that the council and schools should run special Walkability courses teaching schoolkids how to safely walk round our city -and that they should only be allowed to walk round if they and their parents have their licenses. And they have third-party insurance for any damage they cause!
Posted by Bristol Traffic at 07:41