After the RAC coverage of our city in their road pricing waste of paper, we felt we ought to nip out St Michael's Hill and document the zebra crossing at work at 09:25 one weekday morning.
After parking our Bristol Traffic van on the zig-zags, we waited for some pedestrian and who should come along but this gentleman. Damian, he said his name was. We immediately stopped him and demanded that he pay a road use tax which he refused on the basis that if he was going to pay to use the pedestrian facilities he'd like the BRI to re-open the pavement on soundwell street. Apparently he felt that turning one pavement into parking and then closing off the other to reduce the risk to turning cars was somehow wrong, had complained to the council and got fobbed off on the basis that it is hospital grounds. 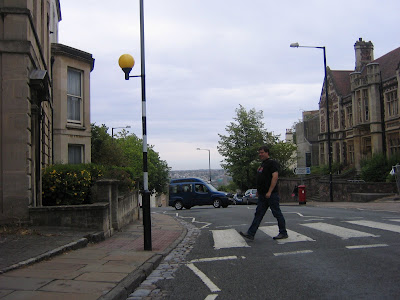 Hmmm. Troublemaker there -worth keeping an eye on. But he does raise a point. If we do start billing the pedestrians and cyclists, they may want value for money.
Next, some tax-dodging pedestrian crosses below the zebra crossing. Visibility for cars descending at speed here is pretty bad, so this person is selfishly risking some vehicle's bodywork. 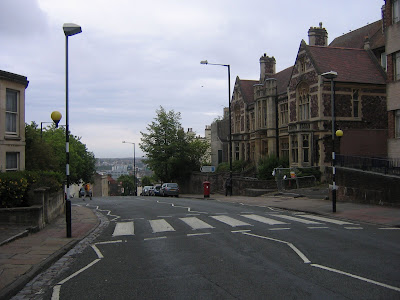 Shortly thereafter, someone walks their bike over. keep an eye on  the two pedestrians on the right by the cars. 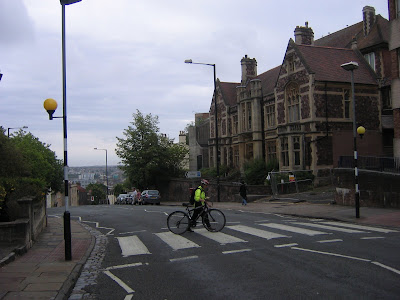 This really annoys us, cyclists who on a whim just jump off their bicycle and wheel it along, as if rules like stopping for pedestrians apply to cyclists pushing a bike. They don't. The car WP03LHW breaks the bad news, as it goes straight over the crossing without waiting for the cyclist to finish crossing. 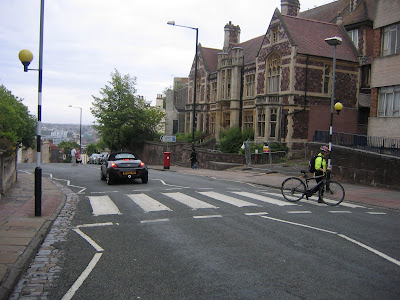 The car does have to put its brakes on for those two pedestrians who have now slipped out. You see that? Even if the car doesn't have to stop for the cyclist on the zebra crossing, it it is forced to by the suicidal pedestrians who would otherwise damage its paintwork. Lucky there's a hospital nearby.
Posted by Bristol Traffic at 19:18

Is there a rule that says you have to wait for someone to finish crossing, once they're safely out of the way? If there is, I guess my driving instructor was wrong...