Every time someone accuses us of being some kind of spoof, we point to the Daily Telegraph and Daily Mail and say "if we are a spoof, then these two papers must also be". They aren't -we view them as fellow-travellers.
That's why we are pretty shocked to see that the Daily Telegraph has published an article praising cycling. 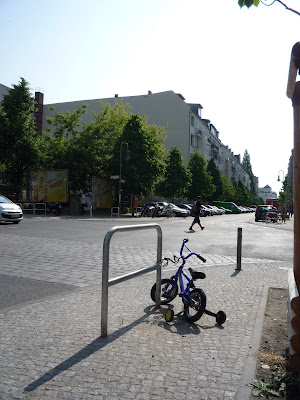 Their points
Obviously, we object to all of these. As, fortunately, did enough people in the article's comments, that perhaps now the Telegraph will know their place better. If we wanted to read articles praising cycling, we'd read the Guardian or other socialist rags.
1. Cycling is only cheaper as they don't pay their dues, because the cost of congestion caused by bicycles, the danger they pose to children walking from the 4x4 to the school gate isn't taken into account. 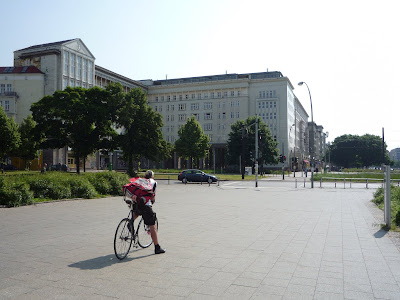 2. Yes, Cycling may avoid the repressive state we read about in the Telegraph and the Mail, but we want that corrected by having every cyclist, every pedestrian registered, number plated, third-party insured and billed. And the speed cameras removed. Because we drivers are not the criminals, the cyclists are. Look at this man: threatening pedestrians on Karl Marx Allee, Berlin. 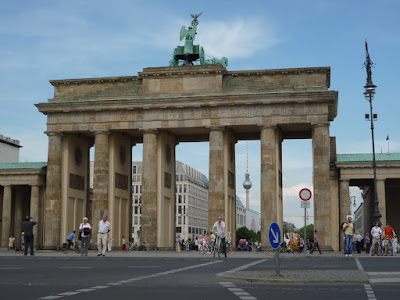 And Berlin? Well, whoever wrote that article missed their history. The liberation of Berlin in May 1945 left vast quantities of open space due to the actions of allied forces, and even today the population of the city is way below that which it was designed for.

Then the partition of E and W, on the photographer's side of the Brandenburg Tor, took away the German's rights to drive their cars through this, the centre piece of Deutschland. When the wall came down they kept it closed to traffic, and now, with the US and UK embassies behind, it, it's going to stay that way. This is wrong. 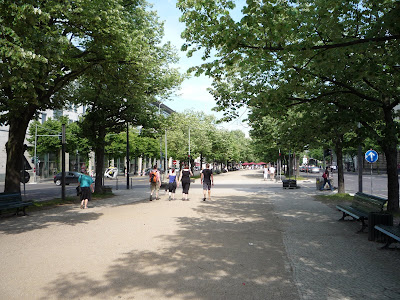 We should be able to drive our cars through the Brandenburg Tor then park them here, on Unter den Linden, the most famous street in Berlin. This is the road where the Nazi government cut down the trees for their marches and rallys. And what did the communists put back: the trees.

The fact that central Berlin is a nice place to walk and cycle is not due to to planning or well-meaning government, it is due to WWII and the repressive, communist, socialist state that followed, and a failure of the FDR to push through the changes this city needs to be a modern European city. After the war, we rebuilt our centre, to give us Broadmead, Lewin's Mead and the Queen's Square dual carriageway. What did Berlin do? Let the pedestrians and cyclists go back to the 19th century on their pre-motor toys.

This may be Europe, but it is not Britain, and any attempt to encourage walking or cycling in our streets must be opposed by the coalition as the EU trying to control our lives.
Posted by Bristol Traffic at 14:14

What would it take for Bristol to become this European utopia? Why, if the liberal tax dodgers are to have their way it would be to bomb the streets to make way for clear, safe thoroughfares for cyclists and pedestrians? Golly, that is inciting terrorism and we'll see how safely you can cycle in leg irons and orange jump suits!

you are missing the point. Bristol centre did also get bombed to pieces. We built a better one: Broadmead!

It is not Bristol that is deprived, it is Berlin!

Point taken. Obviously we benefitted more from the foresight of our blighty post war architects and planners who realised the beauty and functionality of concrete. Post Nazi German architects only considered this wonderful material for pill boxes and bunkers. How they must have wished to have realised that car parks, magistrate courts and shopping centres could be crafted from such materials.