Contrary to public opinion and the comments pages of the Bristol Evening Post, it appears we are not a tolerant society.
Here we see a poor motorist occupying the cycle lane on College Green. With a flat tyre. 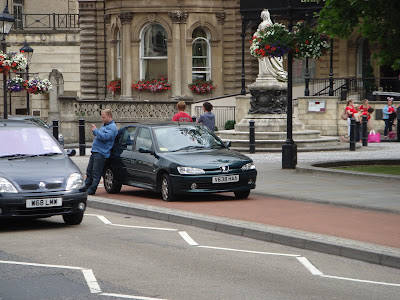 Notice how both he and the car V638HAA are effectively blocking the entire cycle lane, in both directions whilst the driver texts someone important. It seems he's not about to move out of the way for an intolerant cyclist that happens to be remonstrating with him for parking here. 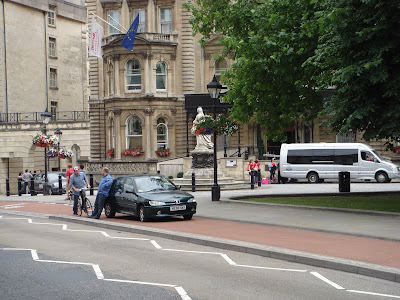 This is obviously an inconsiderate cyclist. After all, he could easily have dismounted and walked his bike around the obstruction instead of making a fuss. 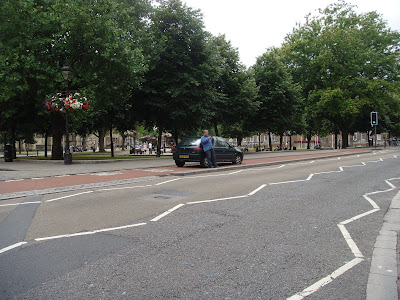 Luckily the cyclist eventually manages to squeeze past and calm returns. But only for so long.

In the half an hour that it takes to buy and learn to ride a fixed wheel bike on the pavement, the RAC van VN09GNN turned up to the rescue. Parked half on the cycle lane, and half on the zig-zags the driver is being very considerate to the drivers about to power up Park Street. But ignore that, cycling on pavements is wrong. 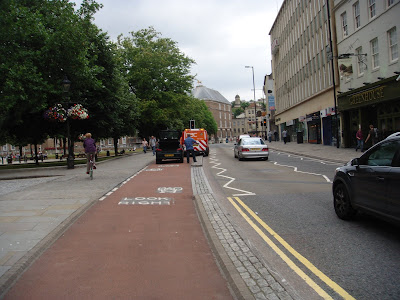 We don't approve of cycling on pavements, because we're not very tolerant. Yes cyclists may be able repair a flat tyre on the go, but changing a wheel on a car is a difficult and challenging process for a driver and requires the use of an Emergency Service. 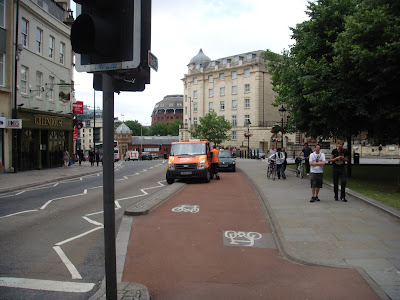 So we had a word with all the cyclists trying get around the obstruction by cycling on the pavement.

We made them walk and be tolerant of pedestrians. We're drivers, and we have clout.
Posted by Quercus at 07:00

That fella isn't stupid. About time someone made some use of that under-utilized parking space!

I suppose you're yet another car-hater who lies and "cleverly" claims not to hate cars because you think such dishonesty will advance your cause?

No? Then what exactly was that evil motorist supposed to do once he'd broken down? He had to put his car somewhere, and the cycle lane was the only practical place. So his behaviour was blameless, and it's clear that you're having a go at him primarily because you think he shouldn't have been driving in the first place. So you're a car-hater. Admit it.

Of course, the cycle lane in question is probably exactly like other cycle lanes, i.e. it rarely if ever gets used. This is because cyclists like you refuse to use such facilities on "principle": you have to make a point about being "proper traffic" and "not being shoved out of the way", even if it means putting yourself in unnecessary danger...at least you've got in the way of those evil drivers and reminded them that you're there and you hate them, eh?

This, of course, doesn't stop you and your ilk vociferously demanding the building of such facilities at public expense, even though you don't pay ROAD TAX (which is what it is really, as you well know). But you don't want the facilities so that you can use them, you just want them to take roadspace and cash away from drivers. Not that you hate cars, definitely not.

When will you and your psycholist mates just give it up and admit that there's a war on the motorist and you're a vigorous supporter of that war? Do you really think the pretence that it's all about "safety" is fooling anyone? Do you approve of safety improvements like dualling the A9, or only those purported safety improvements which restrict or punish drivers in some way (even when they haven't been shown to improve safety at all)? Now why oh why could that be? Who do you think is being fooled by the "I don't hate cars / "There's no war on the motorist" lies?

I'll be checking back to see if you've been brave enough to approve this comment and/or make a reasoned reply which (gasp) actually has an honest go at addressing the points made (your ilk are hardly renowned for the latter). You've gone to the trouble of making an anti-motorist blog so you might as well address adverse comments...if you think you can without losing the argument, that is.