We like Hampton House. A physiotherapy hospital where even the staff drive to work and park on the pavement. Those are people who know most about the dangers of physical exercise, who know walking is dangerous. That is not only why they don't walk much themselves, they try to discourage others. Presumably inside there are posters encouraging people to take up watching TV instead of playing football or walking.
Today, T508BGD has a note in its window. 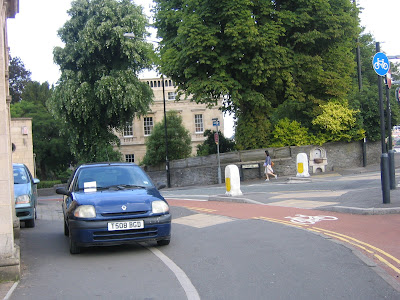 Not a ticket, not some printed junk, something handwritten. 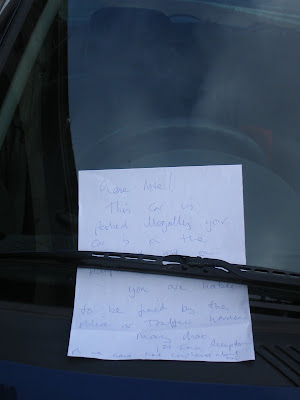 Please Mate!
This car is
parked illegally your
car is on the
(obscured) not on
Hampton (obscured)
you are liable
to be fined by the
police or Traffic Wardens
Mary,
1st Floor reception
P.S. We have had complaints about
this

This is interesting.To be honest, we are surprised by this. We would have thought if the local troublemakers were to be whining, it would be about an NHS van driving down a bikes only contraflow then stopping half on the pavement, half blocking the path. That one even we in B.T. think is just pushing the envelope of defensibility. But why was the van forced to do what it did? Because of the commuters parked on the pavement. If the Hampton House staff didn't block the pavement, there would be a way for vans to legally drive and park that wouldn't even upset the tax-dodgers who pootle round here.
Posted by SteveL at 07:00