Kingsdown: stranger than you think

We often discuss our suspicion that Kingsdown is the home to various pagan rituals, traditions that have gone on in the Avon and Somerset area since before the Romans arrived. The Mayday Tree festival, the darker, midwinter tree. Some people think we jest. But know, there are strange goings on here.
This week, a two-headed goose is on top of one of the buildings. Evil, that is what this creature is -pure evil. 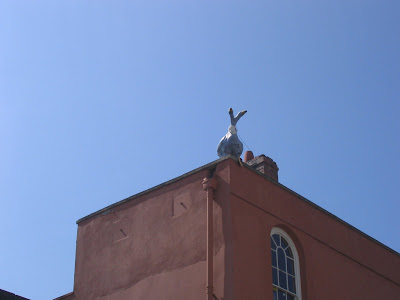 We hear a rumour that one of the houses here has a tunnel going down to the centre, to the original harbour. Smuggling, some people think. We suspect something worse. How else do you get human and non-human sacrifices straight from your boat that has been to strange countries into your part of the city without outsiders seeing, and trying to stop you? How do you retain your close links with Bristol outposts in New England, towns like Innsmouth and Arkham, when your in-laws from abroad don't look fully human any more.

Things have gone on in Kingsdown over the centuries, things only whispered about, but even those whispers gives us nightmares. The fact that the residents feel able to put a two-headed goose up on the corner of one of houses shows they feel stronger now, less need to hide, proud of their heritage.

Is it a co-incidence that this happens within a few weeks of a new leadership for the country, one with two people, both of whom share the same physical features -no neck, shiny foreheads, webbed feet they can't show in public? People who had to be hidden in childhood in special educational establishments, places where their defects wouldn't be so obvious? Places where both sides of the family being related to each other, boarding schools where the odd burning alive of the outsider wouldn't get a mention?

We think not.
Posted by Bristol Traffic at 07:31

Didn't that goose used to live on the Gloucester Road - where the Tinto Lounge is now?

That or there is more than one of the two-headed geese statues out there...