We have a new contributor, "flytopia", who has some good news about the Coronation Road bike path. It's been made more dangerous. In their own excellent words:

On this blog you've often mentioned the excellent Coronation Road cycle path. The path does a fantastic job of bringing cyclists and pedestrians into conflict, as cyclists swerve round the many large trees and streetlamps into the paths of angry oncoming walkers.

If the cyclist chooses instead to ride in the road they will face abuse from drivers, who rightly point out they should be using the cycle path provided. This sends a clear message to cyclists in Bristol - you're not welcome.

However, the immobile nature of the trees leads to a problem - people get used to them. The cyclists know when to slow down, and the pedestrians know when to expect cyclists to try to squeeze past them. What we really need is a few extra obstacles to shake things up a bit. 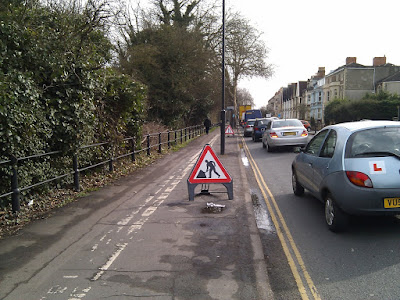 Now these signs may look a bit obvious - after all they're designed to be seen from a long way off, so the cyclist has time to react, slow down and avoid swerving into old ladies. But the fun comes in the evening when the cyclists are returning from town. 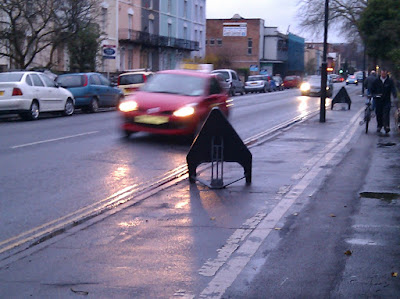 The backs of these signs are invisible in the failing light, especially for those cyclists that are not using lights (which is pretty much all of them, right?)
I've stuck a brief video on YouTube. Unfortunately I didn't catch anyone crashing into the signs and it was raining so I didn't stick around. I got a cyclist sticking to the road and a sensible hi-viz runner

We thank flytopia for their contribution -both photographs and commentary! We hope for more in the future!
Posted by Bristol Traffic at 07:15

They really should put up signs for cyclists to warn them about the signs in the path. They could be placed on the pedestrian side of the pavement. Maybe some signs for the pedestrians too warning them of the signs for the cyclists. Where to put those ones though? Perhaps in the road? No, maybe not, that would be inconsiderate.

There is no precedent for placing signs in aquatic areas. It would require a complete rethink of policies and several TRO's before it could even be considered. Then it would need surveys and consultations, after which the technical brainstorming and problem solving could begin. Projected progress for 2018.

Unless it was possible to implement an "experimental" TRO. Then we could just tie balloons to signs and chuck them in the Avon. There could be a ceremony to mark the event and Aphex Twin could perform live just to make it a bit more experimental.

Actually I think when the council started looking at the option of having a floating bike/foot path from castle park to templemeads they suddenly discovered the militant barge lobby. Think how much effort it took to keep the canals open over the centuries, how well you have to work local and national government, how in Bristol these people defeated plans to turn the harbour into an M-way. I think everyone is scared of the boat lobby. Almost as well-connected as the horse-lobby.

"I think everyone is scared of the boat lobby".

Except for the ones who managed to get "the centre" made all those years ago.

@Adam it's a common problem; at least ours is still full of grass.

There are many things I miss of Brissle, but the rows of little prostate-challenged fountains set in concrete aren't amongst them.

There is a system of placing signs in water, of course; buoyage. Perhaps the idea could be borrowed for road signage, so that 'no parking', say, could be signalled by a row of white buoys, with orange diamonds with orange cross, amber light on 4 second flash. All held together with 6" chain. You could respect signage like that.