Datamining the taxis on Union Street

There's an NYT article on analysing GPS data feeds from taxis to build up a model of traffic flow and congestion.It's interesting but flawed. It only measures the routing options taxis take, which can be constrained by anti-taxi signage, such as as the "buses and bicycles only" bit of Nelson Street, leading to Union Street.

The continued presence of traffic lights here not only holds up buses and bicycles, it holds up taxis too.
Such as Taxi 107, SD06HSC photographed on Saturday March 18 2010 at 14:57. 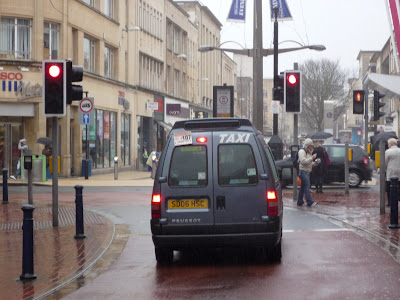 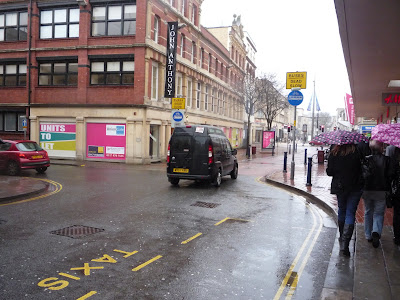 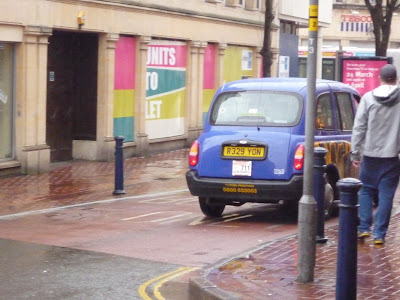 Because the taxis also need to make use of this road, the traffic lights should be adjusted to increase the scheduling time on this lane rather than just assuming one bus every minute. With this taxi flow rate, three vehicles every minute, the entire fleet of Bristol's taxicabs (at least 711, we would guess), would pass through this junction every four hours. The traffic lights do nothing but hold up taxis driving down the buses-only lane.

There: congestion analysis, no need for city wide GPS-instrumented taxis. Which is good for the taxi drivers, as it may log them doing things they aren't meant to.
Posted by Bristol Traffic at 07:02

But those signs state 'pedal cycles and buses only'; n'aw?

It may look like that, but there is a taxi going through every 20 seconds, and as only cyclists ignore road signs, they must be doing it legally. Therefore you must have misread it and the sign says "buses and taxis only", it is the bicycles that are ignoring the sign, tax-dodging scofflaws that they are