The whole Evening Post school-parking series was pretty depressing. A week of press that blamed us, the motorist, for the problems, without once focusing on bicycles on pavements, or pedestrians crossing roads, or buses. Even the comments didn't recognise the real issue: it is bus lanes and bicycles that cause congestion.

One commenter in the recent debate made a good case for turning the playgrounds into car parking. But they miss two points 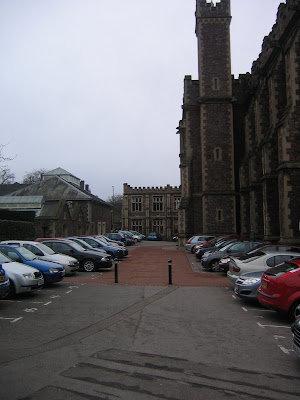 Logistically, then, parking in playgrounds is not something that can be rolled out any further. Which is a pity. Either way, though, the removal of playing fields has got the schoolkids less used to running around outside, so less likely to carry on such a dangerous activity outside school hours. This improves UK road safety statistics, and reduces congestion.
Posted by Bristol Traffic at 07:50

I have to confess that I cycle to school every day and then stash a Brompton under my desk so I'm failing in the good work of using up play ground space to park cars and giving a bad example to kids. Heck I don't even wear a magic hat while I'm holding up the traffic in the east end of Glasgow.

I do have a homeopathic car parked outside since I once parked a real one there and, by the law of succussion, the tarmac should remember it just as if it was really there. I can use it to go home on rainy days.