Give it some heart!

As we said yesterday, it was unfair that bicycles could carry along the flooded A4 Portway at full "race speed" while cars had to slow down from 40 mph -with even that speed limit a recent crime against commuters coming in from Wales, Avonmouth and Portishead. 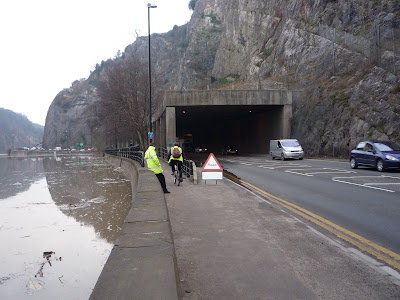 Yet again, an anti-car council fails to recognise the A4 portway is a premier commute route into the city.
We do think that bicycles should slow down, not just because there may be risk to them, but to share the suffering, we, the motorist, must endure. 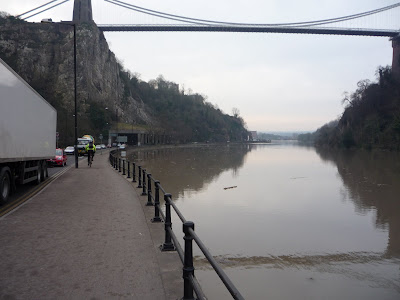 For this reason we are grateful for the heart.fm car, RY07DMV, cunningly placed in the middle of the bike path "reporting on a live news story". The car in front belongs to Bristol Council and they parked to one side of the path and behind some signs, showing unnecessary sympathy to people who do not pay their fair share of tax in the city. 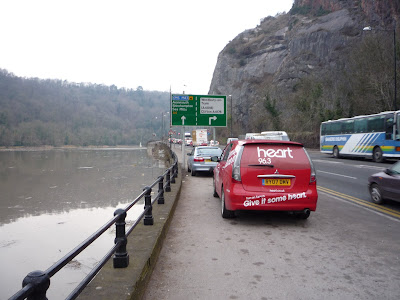 By parking widely, RY07DMV manages to remove visibility for inbound and outbound cyclists, increasing the risk of collision, and hence the chance of a live news story being bigger than "puddle on A4" 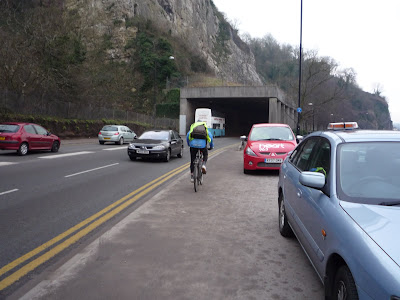 We say: Give it some heart!
Breaking news: we can confirm that a representative of the Bristol Traffic Project will be at the Cornubia Pub tonight, starting at 7:30 to 8 pm, to tell off the cyclists of the Bristol Cycling Campaign and drink some of the beers that the pub has to offer. Normally we would demand, indeed expect unquestioningly that our representative would drive there before downing 18 pints of Hidden Quest Beer and heading home, but apparently the DVLA have just revoked our representative's license for reasons they refuse to discuss, and they will be forced to walk. We understand this is not through choice, and forgive them, as long as they do not get in the way of any cars trying to get over zebra crossings. We believe that this is more evidence that the DVLA is anti-motorist. In the US, even when you have a license revoked for Driving While Intoxicated you are still allowed to drive to and from school and work, yet in the UK once a license is revoked you are not even permitted to pop out for a few pints of beer.
Posted by Bristol Traffic at 12:06