Contributor "A" pointed us at Southwell Street, said we should check it out to see what had changed since our last visit. 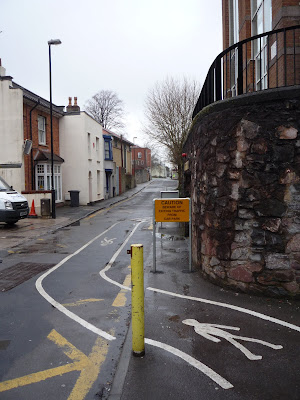 Oh yes. To reduce the risk of pedestrians being hit by cars pulling out of the hospital's underground car park, the pavement is now blocked off, with a sign:

CAUTION:
beware of
exiting traffic
from
car park
Ideally, that would be enough to discourage pedestrians from attempting to use this road, especially given the removal of the pavement on the other side and the placement of a large yellow barrier across the road. This pavement was the only place they could walk, so removing that option should stop pedestrians getting in the way. 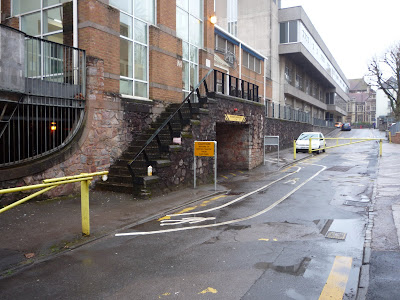 For some reason -perhaps the fear that the Kingsdown Conservation Group includes lawyers, they haven't come out with some no entry to pedestrian signs -though we are pleased to soon have some footage of such signs nearby. Instead they have painted a path on the road, showing pedestrians where to walk.

One concern we had -would pedestrians have the right of way over cars, even though they were now walking on a road. Because on a pavement, after all, one of those pesky little laws says you aren't actually allowed to run over pedestrians -even if they are in the way. 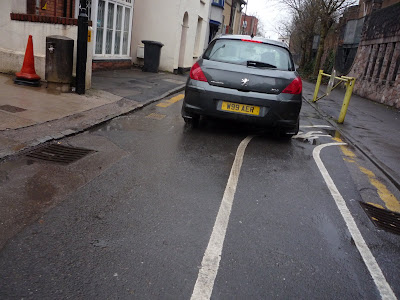 Testing the system was fairly straightforward -wait 30s for a car to come out, see if it does anything resembling looking or giving way to pedestrians. No, it's a road, pedestrians should not be there, its OK for W99AER to cut them up.

Only one question remains: how to get access to the car park? If this area goes residents only, those spaces will become invaluable.

The signs also serve the purpose of blocking the last remaining bit of access that cyclists visiting the hospital used to be able to find through this route, as pictured in your previous photo ( http://3.bp.blogspot.com/_ptbxeIGZlQs/SwZrYDvWweI/AAAAAAAACnE/UJZxZSXr-2I/s1600/IMG_5961.JPG ) . The signs are placed across the dropped curb. I was under the impression that the council were trying to stop dropped curbs being blocked? I wonder how you get access to the hospital now through this side now in a wheelchair, especially if you're trying to avoid the very steep St Michaels Hill?

Every day as I cycle along Southwell Street I save a little swearword for the idiots who put these barriers up. Impressive contempt for the public shown by UHB.

I tested it today -a sunday- with a bike and a helmet camera. Provided you do kerbs, you can still do the pavement. However, you are forced into dropping off the pavement into oncoming vehicles, none of whom seem to view the presence of a person on the road as any indication that they do not have the right of way.

I met a couple with a wheelchair -they and anyone with a pushchair have a hard time. It is a classic example of "Institutionalised Motorism": remove the pavement on one side for parking, block the other off to make it easier for cars. Question is -legality? If it's public pavement, this is enclosure -out and out illegal. If it's hospital land, then this is some kind of EHS issue to report to the Health and Safety Executive for being so mediocre. That or they want to drum up customers, except that hospital doesn't have an A&E, does it?

I am here every week at the moment with my partner who is heavily pregnant.

Everything about the hospital gives you the message that you should arrive by car.

Could they not just have installed convex mirrors for exiting drivers to see pedestrians?

This really is bizarre.

To mitigate the risk of colliding with a car leaving the car park, they are guiding pedestrians into the road with the misleading impression that it is safe to follow the painted footpath without necessarily looking out for traffic. It isn't. You are stepping into the road. Surely this is a worse situation than before?

And no dropped kerbs for buggies and wheelchairs? And what if you're blind? You might be a bit confused to find a sign completely blocking the footpath.

Who on earth comes up with these ideas? They should be sacked. They could have spent a hundred quid on some signs and mirrors for the car drivers and it would all have been fine.

What you've not mentioned is the cute little buzzer that goes off every time the car park gates open to warn pedestrians that there's a car coming.