If you ever get directed by the NHS helpline to drive a small child down to the BRI kids A&E, you are left with the problem of parking.  Assuming you do have an emergency, go into the ambulance only bit outside the Bristol Heart Institute, then -staying outside the warren of buildings- go down to the A&E unit. Drop the kid off and then nip out to worry about the problem of parking without getting fined.


Even if there is space in the parking area, it's minimum cost is £4, in coins, and if you are on an emergency run you may not have it to hand. Out in the street is cheaper as you can pay in smaller amounts. But pay you still do.


Which is why we are pleased to pass on some news about secret BRI parking places, this time credit to the Kingsdown Conservation Group for tipping us off. 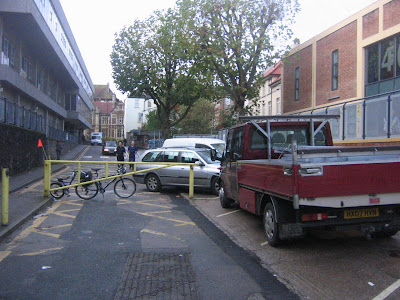 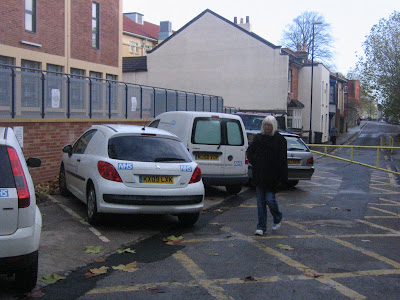 Coming from St Michael's Hill, you can fit a van or estate car in. Even though you poke out into the road, the large yellow barrier ensures that there will no passing traffic, not even passing bicycles. Your paintwork is better protected here than in any nearby roads.

Here then, is our secret BRI parking. There's just one small problem, according to the signage that appears to have gone up as an afterthought. 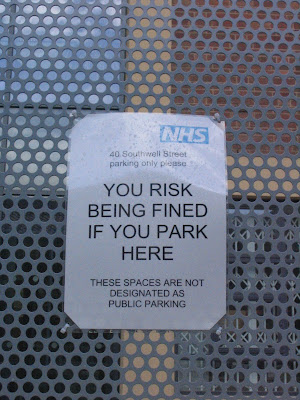 THESE SPACES ARE NOT
DESIGNATED AS
PUBLIC PARKING

This is where it gets complex.The hospital clearly consider these parking spaces theirs, and not for anyone else. Yet in a lovely worded letter from the Kingsdown Conservation Group, we are let onto the true nature of the parking spaces. They are, technically, pavement. As the KCG put it


UHB has appropriated the whole of the pavement for private parking. Photograph 1 shows the path on the north side of Southwell Street to be continuous. Buried in the modern concrete are the remains of traditional stone paving slabs. KCG is not aware of a Highways Act order that entitles UHB to block the pavement to pedestrians.


See that? Not hospital parking. Pavement. It may have concrete on top, but the slabs are still there. Which makes it our pavement. Open to any of us city tax payers to park on.

The KCG include some questions in their letter


1. If the north side of Southwell street is technically pavement, who is authorised to fine vehicles for parking there without permission?
2. In particular, does that "you risk being fined if you park here" sign mean that it is Bristol Parking Services, Avon and Somerset Police, or the BRI?
3. If you do park there, and the BRI do issue a fine, can they actually enforce it?


We await answers. We would also be very curious to know what happens when you do park here. Anyone willing to experiment would have an entertaining day. Alternatively, someone malicious could call Bristol Parking Services or the police and report a number of illegally parked vehicles. That would be fun too, especially if they hung around with a video camera to see what happened next. 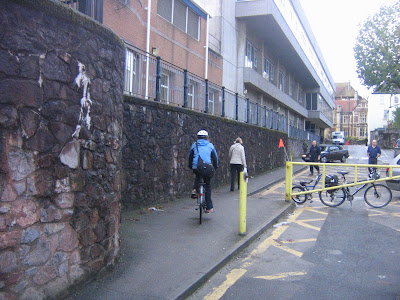 In the meantime, we would like to draw attention to the fact that this popular student route suffers from bicycles on the pavement, just by the barrier. It seems that a wide yellow barrier and a chain on one side is not sufficient to prevent bicycles. We propose a low barrier at the height of a cyclists head. They may get knocked off, but provided they have a helmet it will do no damage -and they are at least outside a hospital.

Posted by Bristol Traffic at 07:11

Hurrah for the KCG. I complained a few months ago (via FixMyStreet) about the appropriation of pavement. The council explained that it wasn't theirs, which left me stumped.

There's a nice new barrier up across the drop kerb now too to stop Cyclists getting through on the non-parking side along with markings showing pedestrians where walk to along and off the pavement.