While looking for an empty bit of bike lane to pull in and get a snack from Ritas, Slix or other nearby establishment, we saw this group of cyclists loitering on the junction of Stokes Croft and Ashley Road. 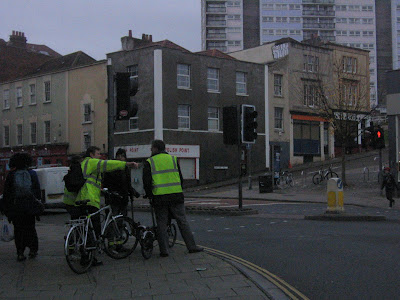 Should we praise them for their Bristol Traffic Approved hi-viz tops, condemn them for their lack of helmets, or merely report them to the police for loitering suspiciously, possibly planning to cross when the pedestrian light went green?


Time for a closer look. And there we we were shocked. Jon Rogers, local councillor and cabinet member for transport, Ed Plowden, transport department minion, Steve Kinsella -lead of the Bristol Cycling Campaign, and his bouncer Martin Tweddell, looking for any potential assassins from the Association of British Drivers. 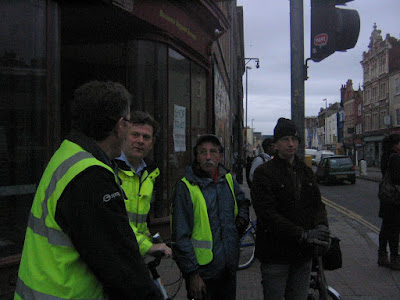 We've been feeling fairly upbeat about Jon this week, since our post on the anti-cycling measures in St Philips, was graced with a comment by him, one in which he promised that future signs would be protected from cyclists by cyclist-dismount signs:

I will check out why "cyclist dismount" signs weren't included. I can only apologise.


I am also not sure why cars couldn't have been allowed to use the pedestrian/cycle lane themselves when there is a loss of a main carriageway lane. It does look wide enough, but I don't know what the access is like.


I have asked officers to clarify the situation.

This looked like "a man we could do business with", to quote M. Thatcher on Gorbachev. Yet what do we now see? The same man promising to make this junction safer for cyclists.


We were very demoralised until we set our lipreader to work out what Ed Plowden is saying to a glum-looking Steve Kinsella. He's telling Steve that the junction works fine and nothing needs to be done.  "There has been one recorded cycle incident in 3 years on that southbound stretch. During that time approximately 1,100 cyclists a day cross the junction southbound, either to go down Stokes Croft or turn left into Ashley Road." Accordingly, the risk is not as great as these subversives claim.

Reassured, we got back into our range rover and when over to Montpelier, where the breaking news is that the locals have stuck in their own in-street bike parking by the Thali Cafe.

Posted by Bristol Traffic at 12:07