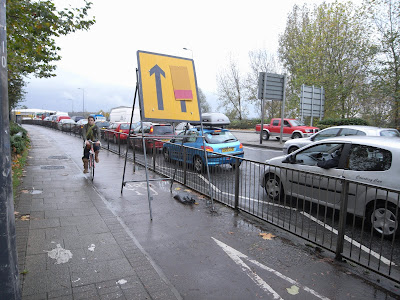 This in turn, caused mayhem on the road as motorists slowed to "rubberneck", each doing their duty as fine upstanding (or in this case reclining) citizens checking that cyclists didn't stray on to the adjacent pedestrian designated side of the shared pavement as those mischevious villains are so often inclined to do. Pictured above is one such cyclist. We won't tell you if she actually encroached on the pedestrian area. I think you can judge for yourself by the look in her cycling induced rage crazed eyes and the flare of her nostrils as she snorts the air for pedestrians to plow down, what happened next. Excuse the blur in the photo, but as is typcal of lunatic cyclists in these situations, she was travelling at speeds well in excess of five miles per hour at the time. 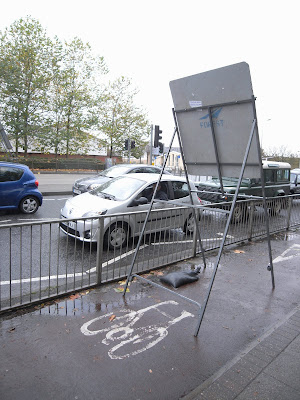 EDIT: Word just in from our man in the Bristol Traffic helicopter that the sign was in fact to inform drivers that the road was down to one lane and not there for cyclists at all.

We have to say that we breathed a sigh of relief when we heard this news. After all the sign pictured looks very much like one intended for use on the roads, paid for by road using drivers. Why should cyclists benefit from it? At the same time we welcome the well chosen placement of the sign giving drivers and cyclists a level playing field. If the road is reduced by a lane then so should the cycle path. It's only fair and just desserts for those cyclists who are always banging on about being equal to motorists.

Extra EDIT: More news just in from our man on the Bristol Traffic Segway that similar signs were placed on numerous surrounding pavements throughout the Barton Hill and St Philips area, giving pedestrians their fair share of obstacles too, some covering nearly the whole width of the pavement.

All in all a good day spent sending out exactly the right message to those misguided tax dodgers who choose to walk and cycle. If anything's going to undermine their disillusioned beliefs that they're doing the right thing then it's schemes such as this. We believe it will be also be of great effect deterring those who are considering getting involved in the seedy underworld of treachery and hooliganism that is cycling. Well done to all involved.
Posted by alice at 08:11

Surely all that is required here are 'cyclists dismount' signs at either side of the large sign so that cyclist can walk under the large sign, ducking while lifting their bicycles over the horizontal bar. Then they would not need to trespass onto the adjacent footway at all.

Signs? Paid for by who? The taxpaying drivers probably I'm guessing!? No, no signs needed. The long term campaign to indtimidate cyclists into their place through routine exercises such as the tried and tested "overtake and pull in", and the "drive fast down narrow roads to make them get out of the way" will start to sink in pretty soon, and then they'll all know their place. That's right, scare them into submission and before long they won't even be able to look at a pavement without shaking. At least that's how they train dogs and it seems to work.

Chris is right. I will check out why "cyclist dismount" signs weren't included. I can only apologise.

I am also not sure why cars couldn't have been allowed to use the pedestrian/cycle lane themselves when there is a loss of a main carriageway lane. It does look wide enough, but I don't know what the access is like.

I have asked officers to clarify the situation.

Apologies for my comment above. I was a bit highly strung at the time of writing it. I'd just driven to the shops for a pint of milk and not only did they only have blue top when I like green, the journey took me 45 minutes and it's ony half a mile. The congestion is so bad in my area. I wish all those other people wouldn't drive everywhere. The whole situation is getting really out of hand. I blame the council. It's disgusting.

@ Jon. Maybe access could be installed for future use, a bit like they've started to do on the other side of the flyover.
http://tiny.cc/access686