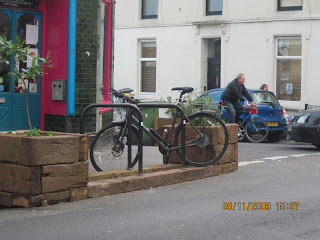 What's this we see in Montpelier? A large unwieldy bike rack in the road, outside the Thali Cafe, with wooden planters full of edible plants! This must be the work of Living Streets, trying to get bikes off the railings and bins off the pavement.... or maybe disgruntled cyclists, trying to get something for nothing again by building a bike rack out of old railway sleepers and pretending it is a garden feature. Actually it is the work of neither...we can reveal that a lone fanatic DRIVER is the brains behind it.

Look closely - there is only two bike racks, hardly enough to deal with the evening influx of two-wheeled non-taxpayers. How would cyclists have transported all the wood anyway? A pedestrian group like Living Streets would have held endless badly attended meetings first, so it can't be them.

Who benefits the most? That's right, the drivers of larger vehicles - like vans and lorries. We can confirm that this is the work of a van driver, not a cyclist. Although some locals are saying they have lost a 'valuable parking space' the fact is this corner used to be a nightmare for lorries and vans as residents would park on the corner, making turning difficult if not impossible. 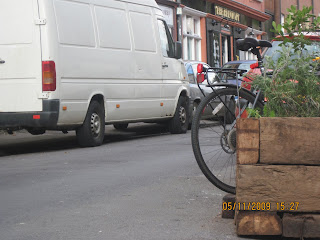 Also, we find on closer inspection, the bike rack is actually a bike trap... as the rack is so narrow, bike wheels tend to stick out into the road, making an inviting target for passing tax payers. 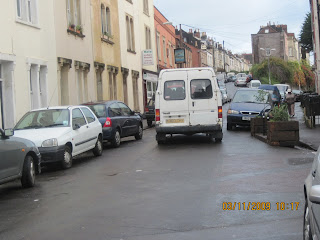 Van drivers now whizz round the corner without needing to put the phone down, and in the unlikely event of a very large lorry negotiating the corner,the sort that used to get stuck, strong delivery drivers can easily nudge them over a bit due to their clever mountings. It happened today apparently. 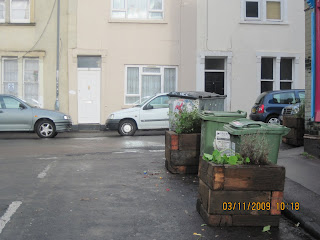 Look at the view above, he also has made it easier for bin men, who no longer have to climb the kerb to reach and return the trade bins to the pavement: now they have a home in the gutter (the bins, not the men).
This will speed up emptying and reduce delays to motorists. Perfect. A double early christmas present. We applaud this van driver for his initiative and cunning - making life easier for drivers but ensuring cyclists get the blame from car owning residents.

Fantastic. Well done Mr. Van-Driver. A service to the community.

A slendid thing, whoever did it and regardless of motivation... one assumes from Mr (it's bound to be a Mr) Tomato's sub-Clarkson digs and touching love of road tax that the motor car has done nothing but add to the appeal of Montpelier's narrow streets. I thoroughly agree- Cobourg Street would lose all its charm without the fun of snapping off wing mirrors as I pedal past, on my way to spend my saved tax money on drugs.