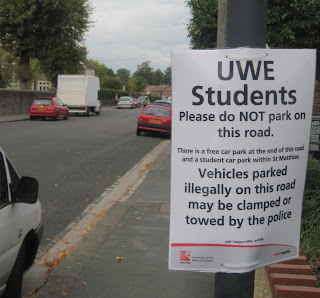 There's two ways people use to preserve the parking in their street for the exclusive use of residents: (a) persuade the council to undertake expensive consultation and planning over months and years, or (b) get`together with fellow locals and 'just do it' 'JFDI'. Neither way is acceptable as it prevents those of us who prefer to drive in from south gloucs every day from finding a parking space.
St Werburghs residents chose the JFDI option a few years ago - banning climbers from taking up parking spaces outside the homes of tax paying residents in the roads around the Climbing Centre off Mina Rd. We raised an eyebrow, but said nothing.
Now Oldbury Court Road in Fishponds has declared itself effectively a 'residents parking only' area by putting up signs suggesting that UWE, the council and, apparently, the police have banned students from parking there. If it works, they have created the perfect RPS - no fees or permits, and no problems for visiting tradesmen, delivery vehicles and elderly aunts. How on earth did they manage it?
The sign reads: 'UWE Students - please do not park in this road. Vehicles parked illegally may be clamped or towed by the police'. The sign is apparently written by the UWE transport office, presumably under pressure from resident groups. These are residents who have cars themselves and therefore should be on our side! Traitors!
We are very worried about the precedent this sets: Car owners are turning on each other under the onslaught from anticar campaigners. Maybe they though it acceptable as students are only marginally more popular than cyclists in Bristol... however we are very worried that a precedent has been established - which can be rolled out to include football fans attending the Memorial ground, dog walkers in Victoria Park, you, and me.
How is it enforced, we wondered. There are no cameras. Do wardens check cars for drug paraphanalia and empty vodka bottles in the footwells? Or is there a posse of curtain twitchers? We suspect the latter, having been passed this photo of an alleged student entering UWE who allegedly arrived in one of the cars on the left. 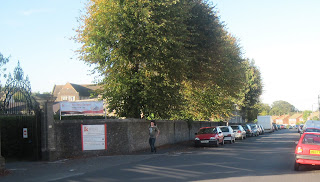 The person sending it in must have hoped we would support them and call for the student to be named and shamed.. No way - he is a hero, standing up for the right to park anywhere!

Hang on though. The sign is alarming, if you are a student, and cleverly suggests that it is illegal for students to park in this road. But in fact it simply states that illegally parked vehicles may be clamped or towed.

We patrolled this road regularly for a fortnight to log all the illegally parked vehicles, and see what happened to them..but the best we could find was this one, a long way from the college and without any drug or vodka-related items left in view. 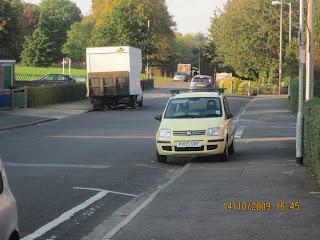 Student car? Unlikely. We suspect this car belongs to a visitor more used to parking in narrow streets where use of the pavement is tolerated. Sensibly, they have chosen to take no risks with their wing mirrors as scores of land cruisers thunder past this spot, on their way to disgorge cyclist-eating dogs into Vassals Park.
Posted by green tomato at 19:00