Want to really impress the girls? 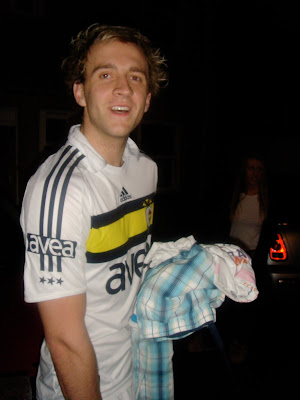 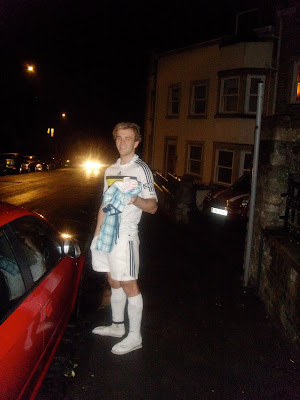 Yes. The owner of YH58YHU is apparently able to seriously impress these 'girls' by arriving at speed, in Redland Road, late at night, by using his 'horn'. Loudly. 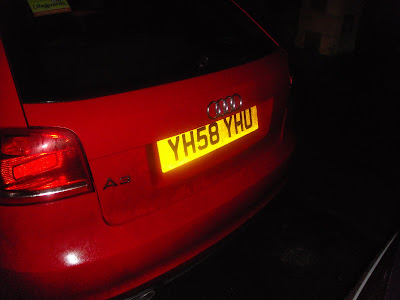 Of course, the girls rose to the bait, rushing outside in their equally fetching attire (note the footwear), only to find a Bristol Traffic reporter questioning the need for such speed and such noise so late in a residential area. 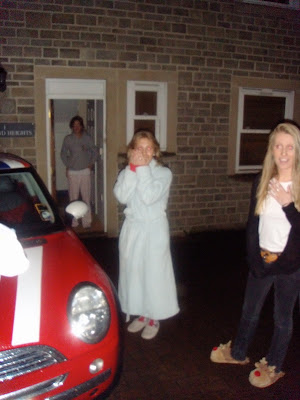 On questioning, the driver of the fantastically impressive Audi A3 stated his speed was merely "33mph, and within the law". Bristol Traffic wonders what subject this young man is studying.
After being told it's illegal to take photographs of people (by the girls), and shouts of 'My dad's a Lawyer', your intrepid reporter fled the scene, worried that one of the women had shouted "I'm nearly 16", and was told by another to "Get a life". A suggestion regarding his haircut was also mentioned.
The owners of P111CHX and R3HCW may or may not have featured in this encounter, but share the same drive.
Hopefully they will set a better example.
Posted by Quercus at 07:00

It's not illegal to take photos of people in a public place - however the two girls appear to be on the driveway of a house (with one inside) so in my opinion the legality of that particular photo (if the driveway is considered private property) is a little questionable.

Far more questionable of course is the mentality of someone who rather than just giving the driver an earbashing (as anyone else would, probably resulting in it not happening again) feels the need to photograph not only him, his car, and the people he was visiting, but note down all the registration plates with the intention of posting them up on a blog later.

Not to worry - I'm sure you didn't come across as a complete oddball.

P.S. No need to enclose the word "horn" in quotes as though it's some sort of slang, it's common parlance nowadays.

Hmm, I'm inclined to agree with Dave. Photographing these people must have come across as very strange, and can't have helped you successfully convey the point to them that sounding one's horn late at night (and for an inappropriate purpose) is selfish and inconsiderate (this being the only real issue, here, if the driver was only 3mph over the limit as he claimed; there are no kids around near midnight, only drunk students). It all rather smacks of the classic journalist habit of trying to make a story out of a non-event! I rather suspect that a civil reminder to the driver that residents would be trying to sleep, without the intrusion on his and his innocent friends' privacy, would have been met with less hostility. That said, kudos to you for at least doing something about it.

Presumably the commenter was unhappy about being woken up. Interestingly, the horn may have been legal if before 23:30, but not after, so the exact timing matters according to the UK EPA: Noise from motor horns is regulated by the Road Traffic Act 1972. Horns may not be sounded in a restricted road between 11.30 pm and 7.00 am and not by a stationary vehicle unless there is a danger to another moving vehicle.

There's an article in the NY Times today, which discusses copyrighting your clothes as a way of managing public photography. I am not convinced that the people in these photographs are uniquely dressed enough to qualify for copyright.

Doesn't matter about the time of day.

From the Highway Code;

The horn. Use only while your vehicle is moving and you need to warn other road users of your presence. Never sound your horn aggressively. You MUST NOT use your horn

•while stationary on the road
•when driving in a built-up area between the hours of 11.30 pm and 7.00 am
except when another road user poses a danger.

Oops. A number of points:

- Bristol Dave, you'll be re-assured that I rarely come across as an oddball, although I have been called mental.

- Photography is legal if done from a public place, or on one's private property, or with permission if on someone else's property. I am not paparazzi. There are no privacy issues here.

- Ben, the strangeness of the action of taking the photos provided an almost Lynch-like quality to the encounter, which was both satisfying and disturbing (The Watershed is screening Mulholland Drive on Sunday, btw).

On a wider point, I should point out that I tend to confront anti-social behaviour when I see it, no matter what the time day, whether in Redland Road or Stapleton Road or anywhere else.

If I can blog it, so much the better. If more people did the same then society might just hang together a little more coherently (although I'm now straying into politics, which is not the focus of this blog, so I'll move on).

Bristol Dave has always struck me as a complete oddball.

Being told to "get a life" is the regular fate of anyone photographing anti-social behaviour, particularly of the car-centric sort.

Everybody should see Mulholland Drive, if they haven't already. It's my second favourite movie after Kill Bill (which is about a cyclist who goes on a rampage of revenge against drivers who have cut her up. She cuts them up!)

I also very much like the tailgating scene in Lost Highway.

To be fair Bristol Dave is consistent. He even acts as a bit of conscience for those of us who do work on datacentre-scale applications.

Incidentally, Chris H and I spent some time discussing the identity of the elusive "freewheeler"; how someone has that much time on their hands in Waltham Forest. I would welcome knowing an email address. Send it to bristol.traffic at gmail dot com, it will get to the inbox eventually.